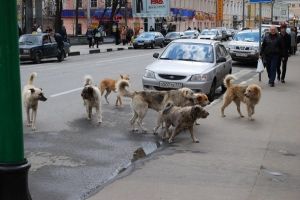 In best-selling book, The Genius of Dogs (2013), evolutionary anthropologist Brian Hare and co-author Vanessa Woods discuss the differences between the social systems of packs of wolves, from which dogs originally evolved, and “feral” packs of dogs that have been allowed to go wild, as exist in many cities, notably in Russia. Breeding in wolf packs—usually a kinship group—is dominated by the eldest alpha couple, whereas, non-kin feral dog packs are promiscuous (which means a very high infant mortality rate).

“There is no dominant pair that leads the group. Instead, the leader of a feral pack is the dog who has the most friends. When the pack decides where to go, they do not follow the most dominant dog; instead, they follow the dog with the strongest social network” (based on a study by Bonanni).

However, there is a debate in the literature as to the effect of domestication on dog peer relationships (in packs) with important ramifications on their relationships with humans. In a recent study by Range and Virányi (reported by Morel), dogs and wolves were raised by humans and then allowed to form packs. They demonstrated that, under these conditions, dogs are more hierarchical and less cooperative than a pack of wolves, suggesting that dogs were selected to submit to (not cooperate with) humans.

This is yet another example of the evolution of emotion preceding the evolution of cognition. The law of Parsimony dictates that humans first selected for submission in dogs, and subsequently selected for cooperative cognitive traits. This would be analogous to the selection of hominin individuals not for cooperation with each other, but first for their submission to the authority of their groups arising due to selection at the group level.

This latter perspective of the submission of individuals to groups not only pertains to hominins but also the social behavior of primates. The perspective sheds a new light on the work of perhaps the most distinguished primatologist alive, Frans de Waal. I was very influenced by his first popular book, Chimpanzee Politics, Power and Sex Among Apes (1982), in which he stressed the competitive nature of chimpanzees. However, since then, he has written no less than seven books stressing what we consider “humane” qualities in animals, such as empathy, consolation, reciprocity, and fairness. These qualities are particularly notable in chimpanzees, bonobos, dolphins and elephants, but are present to a surprising degree in all mammals. His main thrust is to challenge the bias that morality is solely a result of human culture and religion and to demonstrate that it has roots in animal behavior.

The position of this Narrative is to agree wholeheartedly with of Dr. de Waal’s careful demonstrations that all of these pro-social precursors of morality are present in mammals. However, the Narrative differs with his views about their cause and the reasons for their evolutionary ascendance thereafter.
Following the two current paradigms for the evolution of pro-social behaviors at the level of the individual, Dr. de Waal stresses kin selection (nepotism) of relatives helping each other, coupled with the self-interested reciprocity of “if you scratch my back, I’ll scratch yours.” He also notes that pro-social behaviors are found preferentially in mammals due to the likelihood that the inclinations of mothers to empathize and care for their young have spread into adult relationships.

The principal distinction from Dr. de Waal’s ideas I wish to make lies in the affective quality of the proximate emotion-and-motivation behind ape pro-social behavior. It is natural to focus on the goal-oriented, “pleasure principle” behind pro-social behavior. Indeed, an article in Science entitled, “Empathy and the Laws of Affect”, psychobiologist, Jaak Panksepp, hypothesizes that there are ancient internally mediated neurochemical rewards for pro-social behavior in all mammals. 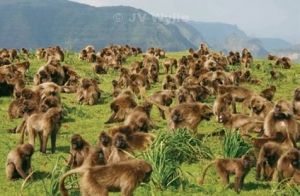 However, it seems clear to me that the primary motivation to reconcile after a conflict is to lower the heightened aversive anxiety that the conflict created amongst all the parties involved. It is central to this Narrative that the aversive anxieties of interpersonal separation and social entrapment at the periphery of the group did the “heavy lifting” by holding in check the atavistic and powerfully antisocial fight and flight impulses. It is first and foremost due to the restraint and stability exerted by the social structure of primate dominance–submissive hierarchies that allowed the more gentle impulses of attraction that motivate affiliation to seep into the social lives of apes during their “down time” in behaviors such as grooming.

The Narrative in this blog suggests that the balancing of temperaments in dogs was secondary to selection for obedience to humans, which then allowed the pro-social elements of wolves (noted by Bekoff and Pierce in Wild Justice: The Moral Lives of Animals-2009) to emerge unimpeded in dogs. Orders of magnitude further than dogs, the result of the hominin metamorphosis was the absorption of the atavistic fight-flight impulses into the two social anxieties creating a hardened protective shell of authority around the internal interactions of their groups. Under the dominance of group authority, pro-social qualities could decisively emerge in hominins from their relatively peripheral role in the social groups of apes, from which, decades ago, Dr. de Waal had been forbidden to enter in a dream he had, described in Chimpanzee Politics:

One Comment on “Were Dogs domesticated to be cooperative with or submissive to humans?”