Our human lineage began with an evolutionary transition six million years ago from the natural selection of individual fitness within ape dominance hierarchies to the natural selection of productivity among human relationships, i.e. teamwork. Dominance-type fitness was an impediment to the scaled benefits of teamwork. So to permit the close engagement required, the dominance mentality itself transformed into the collective authority of justice. Although our own species has evolved a set of different motivations, instincts for justice remain at our core.

We are conditioned to think that evolution by natural selection has to be a process of struggle for scarce resources. Darwin based his theory on Thomas Malthas’ idea of relentless scarcity — in times of plenty, more offspring are produced so the struggle for too few resources continues. But that changed with ancient humans: more successful teamwork could extract increasingly more food and shelter from the same environments due to increasing efficiency. Darwin’s fitness-struggle paradigm describes our own Homo sapiens history of chronic war since culture began amalgamating tribes, say 20,000 years ago, but did not apply to the early migrations of our own species nor to the far more gregarious social behavior of prior human species.

Without millions of years of evolution for teamwork, we would still be competing for dominance over our extended families in our African refuges — and we would never have acquired the capacity to make or do anything worth buying, let alone fighting over!

From this week’s Science by ace science writer, Ann Gibbons:

The story of human evolution is full of ancient trysts. Genes from fossils have shown that the ancestors of many living people mated with Neanderthals and with Denisovans, a mysterious group of extinct humans who lived in Asia. Now, a flurry of papers suggests the ancestors of all three groups mixed at least twice with even older “ghost” lineages of unknown extinct hominins. One candidate partner: Homo erectus, an early human who left Africa by 1.8 million years ago, spread around the world, and could have mated with later waves of human ancestors. 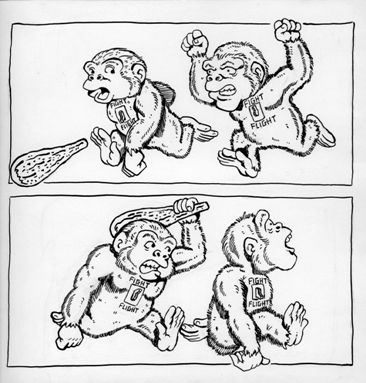