The main function of these posts is to interpret new scientific findings in the paradigm of human evolution portrayed in this blog. In the last few months, I have lapsed in keeping up with breaking developments in the field because I have been busy writing an essay on the subject, having posted some of the early drafts, but now the essay is completed and is out (hopefully) for publication.

One of the blog’s principal claims is that our own species appeared not because we got smarter, but because we evolved the intensely felt sexually-tinged desire, and the desire to be desired, by one another, commonly called vanity. Here is a review. In response to the strengthening of our bonds, the individuals of our species have been amalgamating into larger and larger intercommunicating groups, which led to the “cultural explosion” about 40,000 years ago, in which distributed information finally stabilized sufficiently to initiate the preservation and evolution of complex cultural practices—and the rest is history.

Finally there is some hard science to back up the claim that Homo sapiens are distinguished by their increased sociability. Now excerpting from an article in the November 3rd issue of Science by Anders Bergström, Chris Tyler-Smith entitled, “Paleolithic networking:”

Two studies in this issue use ancient DNA to shed new light on the networks of Paleolithic Neandertals and modern humans, who lived before agriculture was invented about 10,000 years ago. Prüfer et al. report the high-quality genome sequence of a Neandertal woman from Vindija Cave in Croatia who lived 50,000 to 65,000 years ago . . . [who] was highly inbred; her parents were related at the level of half-siblings. Furthermore, the background level of genetic diversity in her genome was also much lower than that of modern humans, suggesting a long history of small group sizes.

Sikora et al. report on two of four paleolithic modern humans found at Sunghir in western Russia. They shared a single grave, which also contained the femur of the third human, whereas the fourth was buried in a nearby grave; they were very likely part of the same social group. Yet, none of these individuals were related at the level we would typically call family, that is, at third degree or closer, and they also did not show evidence of recent inbreeding. If the Sunghir group is representative of Paleolithic modern-human hunter-gatherer groups, it suggests that such groups consisted mostly of distantly related people and were connected to other groups via networks of movement. These findings mirror the conclusions from anthropological studies of present-day hunter-gatherer groups. The study shows that this social structure was already in place 33,000 to 35,000 years ago and may be a general feature of the modern-human hunter-gatherer lifestyle. 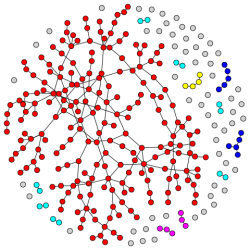