The two mind hypothesis proposes that human capacities such as self-awareness enabling reflective thought, deep complexity of linguistic grammar, and the propensity for mental illness all are underlain by the emotional dynamics between two minds in humans. The “old mind” was evolved in pre-human hominids for six million years, and the new mind was only recently evolved 200,000 years ago with us Homo sapiens.
The most important difference between the old mind and the new one is their radically different modalities of communication. Insight into the method of communication in the old mind, which was exclusively how hominids communicated prior to humans, can be obtained by a psychoanalytic understanding of how the superego is installed in the developing child. 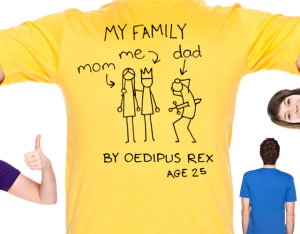 Everybody knows about the oedipal complex. The boy falls in love with his mother, has fantasies that the father will castrate him in retaliation, and then resolves this conflict by giving up the love affair with the mother and identifying with the social prohibitions represented by the father. I remember thinking to myself when listening to some of my professors back then that the idea of castration anxiety was accepted as a root principle and the cause of a panoply of disparate symptoms. Indeed, numbers of times in my practice I came to the conclusion that a male patient clearly did have castration anxiety, and I would feel compelled to say something like, “I know this is going to sound ridiculous, but . . .” After all, from the Darwinian perspective which I subsequently adopted, that particular organ does play an absolutely crucial role.

Melanie Klein was a brilliant British child psychoanalyst who thought that superego formation happened in the infant’s relationship with the mother. The whole issue is so vexing because in constructing a frightening superego, you have to figure out how the child’s own anger makes a “U-turn” in his or her mind and is experienced as fear in the form of shame or guilt. Simply stated, the mechanism of guilt as “anger turned inward” is a central tenet in psychoanalysis.
The key concepts are projection and identification. Identification is a processes by means of which part of you, specifically an emotional part, existentially becomes—actually takes up residence in and begins to exist within—whatever it is out there that is being identified with. In Freud’s time, psychological metaphors were mechanical, so the problem then became, through what mechanism could an emotion be propelled into, let’s say a parent? So, they simply came up with the label of “projection” to cover that part of the identification process.

As the child inevitably becomes frustrated with the mother, that frustration is “projected” onto the mother. At this point the infant is trying to “get rid of” this anger because it interferes with the pleasure of contact with the mother; but, as a result of this process, the youngster begins to experience his or her own anger as coming from the mother. When this happens, the infant has “traded in” his or her anger for the fear inspired by mom being angry back at the infant. So now the child has to cope with having an (imagined) angry mother, which is almost as bad as being mad at her in the first place. What’s a baby to do?
This is where identification “solves” this arcane dilemma. The child “identifies,” or becomes—takes back in and takes ownership of—his or her own rage in its projected form of being aimed back at the child by the mother. The infant is now the proud owner of the beginnings of a superego installed in his or her mind in the form of a little piece of an angry mom that pops out, and is experienced as guilt when behaving badly. If you are confused at this point, you are not alone. Nevertheless, I am not only convinced that this is what actually happens in the developing child, but that this basic process of identification underlaid all communication in pre-human hominids for six million years.

One distinguishing feature about this identification process is that it is aversively motivated, that is, motivated by the attempt to minimize the painfulness of anger interfering with the pleasure of contact with another individual. Through the process of identification, anger is transformed into “rules” that inhibit antisocial behavior thereby permitting productive social interaction. For two million years the pre-human Homo species’ brain expanded by converting competitive anger into ever more complex social rules of productive group behavior (division of labor).
Much of this cognition was involved in the communication and understanding of collective algorithms, which are sequential series of coordinated interactional steps (rules) that a group underwent in obtaining knowledge about the detection and response to predators and prey in hunting and foraging for food.

2 Comments on “The Two Mind Hypothesis; Part I. Communication in the Old Mind: Identification”