During the decade in which I was actively engaged in marital therapy, I became convinced that hidden beneath more superficial reasons that people marry each other is an evolved instinct to re-balance their respective temperaments. Temperament is the component of personality that is derived exclusively from genes and is comprised of blends of paired social emotions and motivations such as aggression/fearfulness, and dominance/submission. I concluded that the complementarity that resulted from this “balancing” mating instinct was most often the cause of the marital problems that drove them to seek help. I assumed this to be the case because the natural selection of this complementarity is not for the couple’s benefit but that of their offspring.

Almost inevitably, in response to varieties of accumulated stress, the finely wrought differences that had united the couple in betrothal had regressed back into the ape dynamic of dominance and submission that patiently lurks beneath all human associations. The irony in many of these situations is that a regression of the naturally and functionally “submissive” partner propels him or her into resentfully dominating the relationship, so they are locked into reverberating each other’s deeply evolved resentment for being dominated by the other.

Similar to my experience in treating mental illnesses in general, the core pathology of the self-reinforcing feedback of emotion that had spun up into a screaming intensity—in this case resentment—had to be wrestled to the ground first. This often proved to be a herculean task. Sometimes I resorted to prescribing both partners small doses of a Prozac-like medication, not just for its emotional modulating effect, but also as a message to them (particularly if it worked) that their compulsive squabbling was a mutual sickness that had detached itself from them as people, leaving them locked into an echo chamber of mutual resentment. Only after the active illness of their unrestrained resentment had abated could a couple digest and benefit from insight into their arcane (and fascinating) dynamics. Occasionally I would plead/demand a couple to “STOP IT!—for me,” so I could engage them in a reliably intriguing revelation of yet another elegant temperamental balance that the mysteries of romance had braided together. Moreover, I came away from that experience believing that complementary variance in aspects of temperament is one of the deepest biological ingredients of romantic love and should be respected and appreciated in a marriage.

As a psychiatrist, I can think of no better definition of mental health than emotional balance, and in my under-life as a philosopher of human nature, I pondered the evolutionary mechanism of this mating instinct that promotes our species’ variety of mental health. Here we have natural selection driven not by a physical environment, but a collective and social environment. First off, it is important to note that this is not evolution that follows the classical paradigm of genetic mutations selected from the bottom-up for the favorable proteins they might produce. At the very least, this is selection driven by two individuals who are competitively pursuing their own self-centered motivations driven by desire.

But step back and think about love solely from the point of view of the individuals involved. This “balancing instinct” would necessarily consist of a motivation capable of strategically gauging and being attracted to the degree of temperamental complementarity of a prospective mate, which, if it is a fit, both strategies would coalesce into what I am claiming is something much more than the desire of each for the other.  And this relational entity emanating from true love competes with the more self-centered and competitive motivations within the individuals involved, such as sex, money, and, of course, dominance.

So the logical step now is to consider this: by virtue of long having been the target of natural selection within the human social sphere, the unitary symmetry of the true-love relationship has itself accrued the quality of possessing a willfulness to survive separate from the individuals involved—and this based directly on the long legacy of success of the stable, balanced temperaments of its offspring.

But all this external logic pales before the real evidence for the spiritual realm in romantic love, which is the experience of it.

Appreciate the spiritual intensity of Juliet:

Give me my Romeo; and when I shall die,

Take him and cut him out in little stars,

And he will make the face of heaven so fine

That all the world will be in love with the night

And pay no worship to the garish sun. 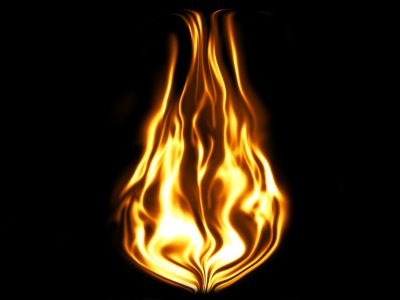