The next task of our Narrative is to resolve the paradox of the virtually static nature of the hand ax industry from Africa and across their vast Eurasian diaspora for 70,000 generations while, during the same time, there occurred an unprecedented growth in the brain.  I believe the solution to this riddle lies in considering the phenomenon of culture from two different perspectives.

Culture is the ability to pass on a technology from one generation to the next.  Surely the reason that the hand ax industry remained unchanged for 1 ½ million years was that there was sufficient contact between blood related networks of kinship groups that this technology was passed along by direct participatory contact in an unbroken chain for over 70,000 generations.  Indeed I would go so far as to say that the persistence and consistency of this stone tool industry over such vast time and distance is testimony to the degree of peaceful contact between groups connected by diverse kinship relations from inter marriage.

However, from the perspective of human culture, in which culture has allowed each successive generation to improve on the technology of the last, it is the absence of such change that strikes us.  There is a manner of perfection about this tool that can be appreciated by holding such an object in one’s hand as I am at the moment of this writing.  Having closely watched for months the specimens of hand axes come and go on E-bay, I bought this one for $465.  It is from the Sahara, which is where many on sale were from.  I have no official papers that it is authentic except by getting a feel for the market over the time I had been reading the ebay write ups.  I assumed that there had been a fairly large cache found there recently dated from 4 to 500,000 years old.

There is a connection that I feel back across the depth of time to the ancestral species that rendered this object.  However, it is not just to the single individual that I feel this affinity, but it extends to the others with whom he was immersed in the utter collaboration in which it was fashioned as a communal act.

There is elemental beauty in the simplicity of its utility.  Fit to the palm of the hand, sharpened all around the edges, and then with one end more rounded and the other more pointed (“cordiforme”- heart shaped.)  Surely some were more facile at constructing them, but that was not the point of it.  Squatting around in a group they all had been making stones with one another since they were children.  It is central to the myth that these people completely lived within each other’s minds.  This was but one mode of communal association in which they spent their entire lives.

The knowledge of how to make a stone hand ax was a procedural kind knowledge like how to walk or run and hunt.  The degree to which they were immersed within the emotions and motivations of coordinating the activities of their small groups from one moment to the next precluded even a glimmer of awareness of knowing what they were doing in any way that they could conceive of improving the utility of it.  Their knowledge and their language were completely immersed in the present coordination of their lives within small groups which had relatively frequent contact with one another.

**IMPORTANT ADDENDUM: In the 1940s Hallum Movius established the “Movius Line” beyond from Central Asia down into the Arabian Peninsula beyond which no hand axes had been found up to then. More recently, hand axes have been found in China and Korea, but in East Asia the tools are significantly thicker, and both the frequency of the sites and the percentage of bifaced construction are much lower (Norton, 2006).

[1]Perhaps the only male advantage left standing is the ability to mentally rotate objects (although I’m pretty sure my exception-proves-the-rule wife is better at this than I am.) Weissa, E. et al (2003)

6 Comments on “The Hand Ax Mystery: Evidence for peaceful association between groups – an excerpt from the book” 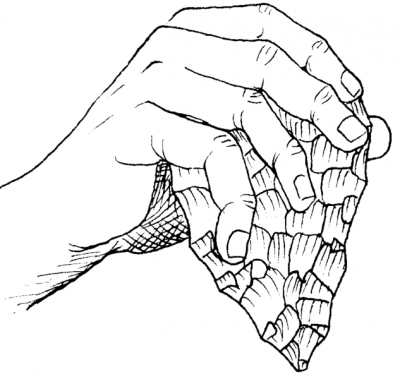