Beliefs about the evolution of human nature have been shaped primarily by Charles Darwin’s theory that evolution results from an unending competitive struggle for survival in the face of scarce resources. Darwin based his theory on Thomas Malthus’ reasoning that this struggle is the result of endless cycles of over-population; in times of plenty, more offspring are produced, so the struggle for scarce resources remains in good times as well as bad.  This core Malthusian rationale has persisted through multiple updated revisions of Darwinian thinking. However, Darwin had another theory of evolution, which has been all but ignored for a century and a half.

Darwin, who famously suffered from psychosomatic symptoms, wrote to a colleague (1860) that “The sight of a feather of a peacock’s tail, whenever I gaze on it, makes me sick.” Darwin finally decided there was no other explanation for the elaborate tail than that these female birds had developed a taste for its beauty. Peahens are motivated to mate peacocks with the most elaborate tails because of the pleasure engendered by the tail’s beauty without regard to fitness or survival value. Darwin considered this kind of mate selection so prevalent in human evolution that he titled his second treatise, The Descent of Man, and Selection in Relation to Sex (1871). He draws on the comparative example in nature of birdsong to propose that the ancient beginnings of our elaborate vocal (as opposed to gestural) language was singing, selected for the pleasure of its beauty.

Yale’s Richard Prum is a prominent field naturalist (who studies birds) in the tradition of Charles Darwin (who studied everything), Edward Wilson (ants) and Thomas Seeley (bees). In his book published in 2017, The Evolution of Beauty: How Darwin’s Forgotten Theory of Mate Choice Shapes the Animal World – and Us, Prum dusts off Darwin’s theory of mate selection and offers convincing evidence from a variety of bird species for the prevalence of female mate choice over forced mating by males. He hypothesizes that human females have similarly chosen males who allow them the autonomy to do so and, like Darwin, proposes that much of the outer appearance and inner dispositions of both human males and females are the evolved effects of mate choice.

Among the earliest human artifacts found in Africa and dated to about 100,000 years ago are pierced shells and beads, presumably used for jewelry, and red ochre dye that continues to be used for body decoration today. The human taste for beauty led to selection over time of mates who were increasingly motivated to wear, do, or make something beautiful. I have proposed that the effect of this attraction to beauty, linked to an evolving motivation to display it, gradually strengthened human social bonds drawing together progressively larger intercommunicating populations past a critical density at which knowhow (tools, shelter, etc.) could be preserved and improved across generations. It is not by chance that the earliest examples of sustained human culture are works of art, like the beautiful 35,000-year-old paintings in the Chauvet Pont d’Arc Cave in Ardèche, France.

Sitting at home witnessing this pandemic offers us an opportunity to assess human nature and the time to contemplate it. For sure, Malthusian competition for scarce resources is on the surface of our discourse (masks, ventilators, relief money, etc.), but I invite you to think also about Darwin’s conclusion that beauty permeates human relationships and about the idea that beauty is an evolutionary force that draws us together. When you are watching those involved in this catastrophe on TV, shift your focus from their external appearance to the motive inner grace with which they reach out to you, the expressions on their faces, the way they stand, their attitude and tone of voice. Sensitize yourself to the gracefulness in their manner that relentlessly draws all of us together to make us vulnerable to this pestilence. 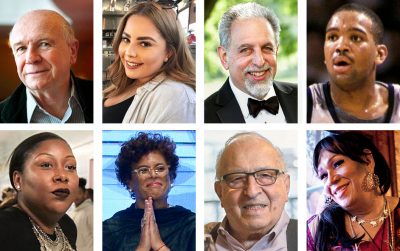