Donald Trump is bald like me. I got over it, but Donald lets his hair grow out in the back, dyes it along a spectrum of orange to blonde, combs it over into his trademark bangs, and fashions Elvis-style sweepbacks on the sides. (He also paints his face, whitens his teeth, and wears a girdle.) As a student of the evolutionary roots of human motivation, I have concluded that an evolved human instinct drives Donald to concoct his hairdo. Sadly, the same instinct also drives our vulnerability to pandemics.

Our president’s motivation to cover up his baldness is called “sexual display” by biologists, and it pertains to mating. Examples abound in nature, from birds’ feathers and songs to insects’ chirping away, all saying to each other, “Here I am . . . Where are you?” In his second great treatise about evolution, The Descent of Man, and Selection in Relation to Sex (1871), Charles Darwin theorized that sexual display—not just survival of the fittest—has been a major factor in human evolution.  Sexual selection for displays is reflected in our dating process whereby we sort through potential mates by our preferences for certain displays, many of which are aesthetic. Undoubtedly, many individuals, both male and female, prefer Donald’s bright fluffy bangs to my bald head!

There is abundant evolutionary evidence for the motivational power of sexual display in modern humans.

All the attention on these aesthetic displays has come at a cost. We are drawn to congregate together in great numbers to display our aesthetic qualities. This propensity to congregate in the interest of sexual selection makes us vulnerable to microbial predation. So the very same passion that has backed our president into those outrageous hairdos also deeply stirs a natural impulse within us all to suddenly dash out into the crowded, COVID-infested streets, rip off our masks and join the joyous chorus of surrounding creatures to sing out to one another: “HERE I AM! . . . WHERE ARE YOU?” 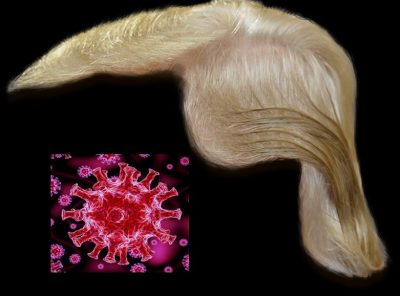