Since I had worked in prison as a young psychiatrist, and had observed the natural facility for communication between individuals within enslaved relationships, I was sure that the interactive human mind was the evolutionary result of the internalization of the relationship that defined the signature primate hierarchical social system—dominance and submission. As discussed in the previous post, I assumed for decades that, since dominance and submission was about politics, it all must have started with the basic math of politics: two against one…but I was wrong.

After I found the Ardipithecus ramidus issue of Science lying on my doorstep in October of 2009, everything fell into place in an instant. It was as if the entire structure had all been assembled within my brain and the hard facts within these bones, bearing not the slightest contradiction to any of it, caused me to inspire—an inward draft that gently released a veil thereby revealing the dazzling wholeness of it at long last. 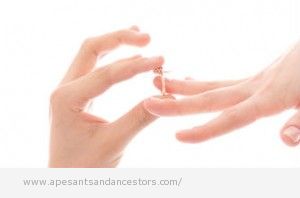 If monogamy was the founding social structure of all eusocial insects, such as ants and bees, why wasn’t it the founding structure of our own eusocial species? If large brains are associated with monogamy in all mammals (except primates) why wasn’t monogamy the cause of our large brains?  A monogamous social system transformed politics into productivity. Those subgroups within groups that conducted themselves with the righteousness inherent to monogamy simply out produced those that did not—no active competition was necessary either within or between groups.

I had been thinking about selection inclusion as the key mechanism for over thirty years: if one sex could be selected to select traits the other sex, why couldn’t one mentality (dominance) be selected to select traits of economic productivity in the other mentality (submission)? If genes could be the unit of selection as opposed to individuals, why couldn’t the dominance genes of these productive subgroups coalesce and lift away into the relational sphere and acquire their own agenda to maintain the prolixity of monogamy independent of the individuals in which their physical biology dwelled? 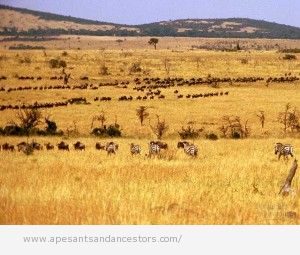 So, the group-organisms of the early hominid species evolved peacefully from the bottom up, from subgroups within groups. They stood up because they needed to constantly communicate with their upper bodies in order to divine the intentions of the groups of which they had become the component parts. For the first 3.5 M yrs., they had no need for large brains, but were content to be to live bovine lives feeding on the grasses with their large molar teeth and extensive digestive systems.

It was from this Edenic existence that our own Homo genus evolved large brains selected to coordinate their survival in harsher climates as group-organisms. It then has become the awesome destiny of our own Homo sapiens species as was prophesied by Isaiah that the peace and justice of God within small kinship groups would expand with seemingly unending agony to at long last emerge into a single kingdom on earth.