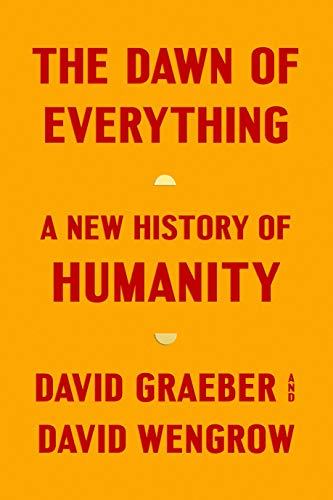 In The Dawn of Everything: A New History of Humanity in which David Graeber and David Wengrow assemble a vast array of archeological evidence from prehistory, much of it recently discovered, and interpret it in a wholly original way. The book, published in 2022, offers an alternative to the widely accepted Rousseauian narrative that, about 10,000 years ago, egalitarian life within hunter-gatherer kinship groups was transformed by an agricultural revolution that led to private property, social stratification, and chronic war. Abundant evidence indicates that the domestication of plants and animals was anything but a sudden event, but rather gradually emerged over thousands of years of alternating between “playing” at (and learning about) farming while still engaged in hunting and foraging in the wild.

The book replaces the agriculture→social complexity-chronic war paradigm with vivid evidence-based narratives of multiple ongoing struggles between human impulses for domination pitted against reactive impulses for freedom from domination. The authors offer just three ways, either singly or in combinations, to establish control over populations in ancient times (with their modern equivalents): 1) intimidation through violence (police), 2) control over exclusive knowledge as in arcane religious rituals or bureaucratic expertise (cf. “deep state”), and/or 3) through seduction by competing charismatic leaders (politics). Similarly, they propose three disarmingly simple modalities in which freedom from domination can be pursued: “1) the freedom to move away or relocate from one’s surroundings; 2) the freedom to ignore or disobey commands issued by others; and 3) the freedom to shape entirely new social realities [constitutions] or shift back and forth between different ones [as during extended carnival seasons].”

It is now known through ancient DNA that human populations in Africa from 80-20,000 years ago existed within very active continent-wide social networks in which familial kinship (kin selection) was a minor factor, and with little physical evidence of group conflict. Similarly, the earliest human settlements were spread over very large areas with no evidence of social stratification or violence and were widely interactive such that anyone could relocate away from an abusive circumstance with the expectation of hospitality (freedom #1). On the periphery of these settlements, the earliest dynasties emerged to wage chronic war. The initial establishment of these burgeoning dynasties was marked by theatrical displays of torture and mass executions—including of the aspiring king’s own retinue and, later, on the occasion of his funeral.

In my essay (click here), human nature is viewed as the dynamic interaction among the different kinds of motivation evolved during three broad periods of our evolutionary history: primate, hominin, and Homo sapiens. Each of these fundamental motivations fits comfortably into each of the three methods of dominating populations, which the authors derived from archaeological findings: 1) the threat of violence is inherent to primate dominance competition, 2) capacity for the acquisition of knowledge is the fruit of six million years of evolution for coordinating teamwork in hominins, and 3) attraction to charisma (social display) characterizes our own species.

Note that primate domination and Homo sapiens vanity are competitive instincts, which evolved for the benefit of some individuals at the expense of others. Knowledge, in contrast, is part of the ancient human adaptation for the decisive function to perceive and respond to environments collectively. Because codes of justice are intrinsic to collective functioning, it is reasonable to assume that long-evolved instincts at the relational (as opposed to the group ) level for the justice and fairness required for teamwork continued to prevail when these highly mobile ancient populations aggregated into the far-flung earliest settlements. Indeed, archeological evidence indicates a gradual and peaceful development of knowledge about farming. In these early settlements, the freedom to escape abusive domination was the result of ancient human instincts evolved for collective function, such as learning about farming and sharing its labor.

As is discussed [in this essay], the desire to be desired for social displays (vanity), and the attraction to this charismatic behavior, have been powerfully selected for their benefits of drawing populations into progressively larger intercommunicating associations, eventually resulting in these earliest settlements. However, as humans’ self-reinforcing social selection for charisma-and-its-adulation intensified, violent primate impulses for dominance and submission reemerged from millions of years of suppression by hominin codes of justice. As mentioned above, on the margins of these early settlements, “heroic societies” were founded by competing charismatic politicians marked by theatrical public human sacrifice, slavery, chronic war, and monumental architecture. Dynastic Mesopotamia and Egypt, and the Inca and Aztec empires all coalesced from far-flung decentralized populations.

The authors point out that, “People have an unfortunate tendency to see the successful prosecution of arbitrary violence as in some sense divine, or at least to identify it with some kind of transcendental power.” In this fatal human weakness, primate submissive responses to violent dominance displays are sexualized in our species’ signature adulation for charisma: the long-evolved collective mantle of authority becomes overwhelmed and displaced from its roots in justice (and truth). Indeed, the source of the evolved human authority of justice is transcendental in that it has been selected for the benefit of relationships among individuals and thus emanates from a virtual, relational (and spiritual) space. I propose that these early dynastic kings seized the mantle of this long-evolved human “transcendental power” from its relational roots.

So, charismatic politicians emerged, able to seduce-and-intimidate populations into ritualized orgies of violent subjugation. The ancient human experience of collective trust, belief, and belonging, which, for millions of years had evolved for the productivity of relationships, in our own species, has been harnessed to the collective phenomenon of group identity. Over time, our unique capacity for collaborative communication, including codes of conduct, was subjected to the rendering of the brutal natural selection that results from chronic war. For over 10,000 years, war-like, us-vs-them collective inclinations (including mob psychology), laced with our species’ signature romance with charisma, have been naturally selected for the superior capacity of tyrannical hierarchies to win wars—by the usurpation of ancient human instincts for teamwork.

In their discussion of group identity, Graeber and Wengrow highlight the concept of schismogenisis, introduced by anthropologist Gregory Bateson in the 1930s in which contiguous cultures each draw their respective identities by adopting diametrically opposite values from the other. Athens and Sparta are the classical example, and the authors point out many others. They begin the book with a description of the North American Pacific coastal peoples, who lived off abundant salmon; nearly 4,000 years ago there is evidence for the onset of chronic war devoted solely to capturing slaves. “Oligarchs” competed with each other by staging extravagant feasts (“potlatch”) culminating in theatrical destruction of valuable works of art along with killing slaves for show. These displays were intended to impress and maintain the support of ordinary people, because these chiefs had not established the administrative knowledge to coerce their own people.

To the south in northern California were the Yurok people, who developed a diametrically opposite culture. Although there were abundant fish, their staple diet was acorns and nuts which could be stored and processed over long periods of time, so they had no need for slavery, which was anathema to them. Anthropologist Walter Goldschmidt compared their culture to the “Protestant ethic” popularized by Max Weber. They pursued wealth just as vigorously but displayed it modestly, were ascetic, and went to great lengths to demonstrate that they worked hard to earn their wealth, which was ritually destroyed at death.

The authors propose that the Yurok were initially motivated to free themselves from the threat of slavery, but then both these northern and southern cultures were spurred by their intrinsic animus to adopt identities for values that were diametrically opposite from the other. We can observe this polarizing process in our political parties today. I propose that schismogenisis has been integral to the evolution of our collective instincts for group identity, which involves sustained unconscious communication of, and willful obedience to, group values and codes. As discussed in the essay, the functioning of identity is disabled in schizophrenia.

Tags: David Graeber, David Wengrow, The Dawn of Everything