I have chronicled how in my study of clinical depression I gradually came to the conclusion that the basic mechanism of all major mental illnesses is similar to cancer in that it represents the escape from regulation into unrestrained pathological hyperactivity. In cancer, the hyperactivity is the growth of cancer cells; in mental illness, it is the unchecked, relentless intensity of an emotion that specifically relates to our social interactions. In the case of the “major” depressions, the emotion is fear, either of interpersonal separation or the fear of being trapped at the bottom/periphery of a social group, on the precipice of banishment. (Short excerpt about fear of separation as an emotional fossil here)

Although schizophrenia is known as a thought disorder, I became convinced that, similar to all other mental illnesses (excluding “organic” conditions, such as Alzheimer’s disease), it too represents the breakdown into pathological hyperactivity of an emotion. But what emotion? I finally came to the conclusion that the most striking feature of schizophrenia is the intensity with which these patients believe in the reality of their delusions and hallucinations. I then started considering the emotional component of belief as a candidate for what it is that breaks down in this most enigmatic of all illnesses. In my researches about belief, I discovered that the original meaning of belief was similar to believing in a football team (or political party): competitive loyalty to a group, which, of course, is loaded with emotion. Only with the Enlightenment, when knowledge became more theoretical, did the meaning of belief start to mean loyalty to the “truth-value” of a theory, such as Darwinism, on account of empirical, scientific backing. In this newer meaning, the loyalty aspect of belief disappeared and now had only to do with truth value, as in, “Seeing is believing.” Here is a section of the book in which I struggle with the idea that schizophrenia is the pathological escape from regulation of the emotion of belief.

The origin of believing

An issue that was involved at one point in my contemplation of this condition was whether or not the emotion in schizophrenia represented just exactly this competitive loyalty component that is so prominent in the group alliances of modern humans. Was the emotion that breaks down in schizophrenia really just akin to the cheering and booing at Yankee Stadium?

In my conversations with patients with schizophrenia, I could not perceive any emotions remotely related to group competition or loyalty. Certainly there are disjointed thought messages from external agents, which sometimes are hostile to the patient, but these are private communications, and aggression is always reactive. The nature of the intense emotions elicited reminded me more of those in the dominance-submission relationships I observed in prison.

For example, as I write this, shootings in the Washington Navy Yard have just occurred. Initially people assumed that the perpetrator was a terrorist motivated by hostile group beliefs. It turns out that he was suffering from schizophrenia. In an email recovered by the FBI, he expressed his motive: “Ultra-low frequency [microwave] attack is what I’ve been subject[ed] to for the last 3 months, and to be perfectly honest that is what has driven me to this.” The emotional mechanism itself whereby the authority of groups normally communicates with their obedient members reverts in schizophrenia into an intense dominance-submission relationship. It is the process of believing that is awry.

As I settled into the idea that schizophrenia is a disturbance in the communication from one’s groups that is mediated by the feeling of believing, it had long become my inclination to cast my mind backward through deep time to consider how this particular facet of our communication could have evolved. I considered that the principal modern function it serves is binding together large groups in competition with each other and that this function must have been a recent adaptation that resulted from the development of culture. Persistent signs of an evolving culture are only about fifty thousand years old and appear to be exclusively a capacity of us Homo sapiens. The function of binding a group by means of members’ feelings of loyalty must have been derived from a far more ancient phenomenon that existed within the groups of premodern human species who spent their entire lives with the same relatively small group of people and had no need for our modern identities. Nevertheless, within these small groups the emotion of believing surely was fundamental to communication.

Because schizophrenia is such a crippling and consistently widespread disorder, and because it leaves spoken language ability largely intact, I started to think that the aspect of communication function that it disabled, which operates in the background, is a vestige of something that had been far more central to prior species of hominins. In other words, this one facet of modern communication that serves to transmit group beliefs and loyalty had been the only form of language communication and therefore essential to hominin survival. What if, prior to modern humans evolving our complex, multifaceted vocal language, communication was solely motivated by obedience to the evolved authority of groups? The goal of communication for the members of a group would have been to ascertain from one another how together they should coordinate their behavior in such a way as to maximally benefit the group as a whole. This would be analogous to a group of believers discussing how to behave in a manner consistent with their shared beliefs. It is likely that this ancient component of our modern language, which has receded into the background of our communication, is disabled in schizophrenia. 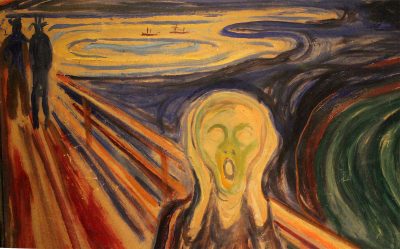