Do terrestrial geomagnetic field reversals have an effect on Earth’s climate? Cooper et al. created a precisely dated radiocarbon record around the time of the Laschamps geomagnetic reversal about 41,000 years ago from the rings of New Zealand swamp kauri trees. This record reveals a substantial increase in the carbon-14 content of the atmosphere culminating during the period of weakening magnetic field strength preceding the polarity switch.

Excerpts from article: . . . coincident with Earth’s weakened geomagnetic field immediately preceding the reversed state of the Laschamps, we describe the “Adams Transitional Geomagnetic Event.” The lowered geomagnetic field intensity during the Adams Event, together with major changes in the intensity of cosmic radiation, is estimated to have increased levels of atmospheric ionization and ultraviolet (UV) radiation, especially in equatorial and low latitudes (<40°), because of a 10-fold decrease in the cosmic ray cut-off rigidity. During [this period], the ionization in the middle stratosphere and surface UV radiation levels are estimated to have been further heightened (up to 25 to 40% and 10 to 15% above current levels, respectively), after taking into account changes in the solar spectrum. Furthermore, these values are likely to be much greater during the short-lived solar energetic particle events.

The implications of this study are considerable. For instance, the Adams Event is very close in timing to the globally widespread appearance and increase in figurative cave art, red ochre handprints, and changing use of caves ~40 to 42 ka, e.g., in Europe and Island Southeast Asia. This sudden behavioral shift in very different parts of the world is consistent with an increasing or changed use of caves during the Adams Event, potentially as shelter from the increase of ultraviolet B, potentially to harmful levels, which might also explain an increased use of red ochre sunscreen. Rather than the actual advent of figurative art, early cave art would therefore appear to represent the preservation of preexisting behaviors on a new medium. Other important archaeological boundaries during the wider Laschamps include the extinction of the Neanderthals (recalibrated here at 40.9 to 40.5 ka). 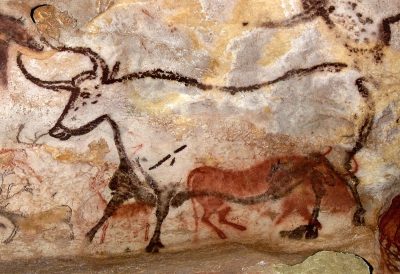