This blog proposes that the primary innovation of our own 200,000-year Homo sapiens species occurred in the emotional sphere and consisted of a marked increase in the motivation for “display” behavior, the function of which can be compared to the emotion-and-motivation of a peacock to display his tail to a female. We normally don’t think about the motivational component of animal behavior, let alone its quality of feeling. The unique aspect of the Blog’s perspective is to place an emphasis on the following in human evolution: (1) the motivational-emotional components, and (2) that they occur within the social-relational sphere (as opposed to the physical environment). In

this view, the biological “agenda” of the emotion-and-motivation to elicit a specific emotional response in others is established first, which thereafter determines the adaptive function of all the varieties of behaviors that are progressively evolved, along with their cognitive mechanics. (This amounts to teleological thinking—final causes and “purpose”—in evolution, which is still taboo within current Darwinian paradigms.)

Actually the uniquely human motivation for “self-display” differs from the animal model. Our species’ motivation to display the individual self is not just for the opposite sex but is intended for everyone; the goal of this behavior is to 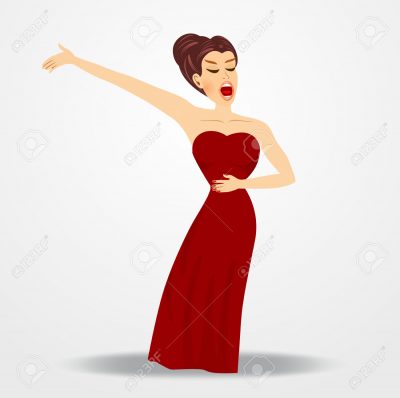 elicit a positive response in as many others as possible. This kind of evolution is self-reinforcing in that there is a positive feedback-loop between the evolved motivations-to-display and elicited positive emotional responses in the “audiences;” so this encapsulated evolutionary feedback-loop can develope rapidly veering off in unpredictable directions. But the Darwinian goal of all the resulting gyrations—from wearing jewelry, to painting on cave walls, to singing in operas—is always the naturally selected result of increasing the strength of social bonds; The steady strengthening of our bonds by virtue of our relentless desire for one another is the engine that drives the “mission” of our peculiar species. More on this big picture in a moment.

Basic paleoanthropological evidence for this kind of “reciprocal selection” between the sexes exists in the comparison of modern human skeletons with those of prior hominin species. Modern human adults are more gracile and childlike, and have proportionately bigger heads, than their hominin forebears, which is the result of a process known as neoteny. Retention of juvenile features resulting in more youthful-looking adults makes them more appealing to the opposite sex (I claim that human display behavior goes well beyond sex). In addition, there is persuasive psychiatric evidence that self-display behavior has been predominantly evolved in our own species from a Darwinian analysis of the manic phase of bipolar disorder, described in detail in the book.

Within current Darwinian paradigms, the use of jewelry in the form of decorative shells or beads in early modern humans is thought to denote that a crucial cognitive threshold had been achieved: the capacity of symbolic representation. However, there is very little agreement on how to define this symbolic-cognitive transformation in biological terms. 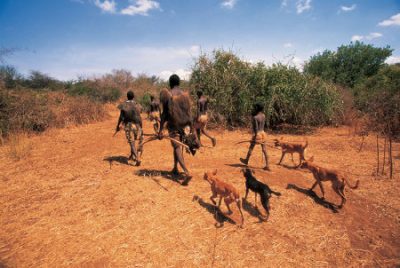 It seems to me that a much simpler initial approach to the biology of making jewelry is not to focus on what is going on cognitively, but to understand the emotion-and-motivation behind the wearing of jewelry,

which stimulates new thinking about the nature of its adaptive role. Seen in this way, the origin of jewelry-wearing behavior becomes a question a child can answer: they wore it because they had evolved (or possibly “uncovered”) the desire to make themselves look more attractive to the opposite sex. As mentioned, I argue that actually the Homo sapiens’ desire for esteem was/is not just sexual, but more globally aimed at a wider social “audience.” Yes, I claim that what our own species has essentially brought to the 6-million-year hominin table is this apparently superficial narcissistic, desire to be loved, and that, paradoxically, the reason that it was naturally selected in nature is that this relentless desire for one another has steadily (and painfully) cohered us into progressively larger and, therefore, more prolific and productive groups.

There was a scientific study published last week that poses a challenge to this theory.

In the Proceedings of the National Academy of Sciences, bio-archeologist Matthew Collins from the UK and a grad. student published a very persuasive study showing that Neanderthals made the pictured jewelry in the form of beads and shells dated to 40.000 years ago. Spectacularly, they found a predominance of an amino acid characteristic of Neanderthal collagen in a newly-developed protein analysis of bone chips associated with the jewelry, in addition to testing their mitochondrial DNA for corroboration.

This report is important to cognitive theorists, because it means that Neanderthals had crossed the cognitive symbol-making threshold. A principal issue is this: at that point in time Neanderthals and modern Homo sapiens were living in the same general regions—in what is now Israel and spreading into southern Europe. So the question is whether or not Neanderthals started wearing jewelry by themselves, or whether they were simply copying behavior for which there is clear evidence that Homo sapiens had been doing for at least 50,000 years prior to that time.

My bet is that the Neanderthals had picked up this practice from modern humans. Think of the possibility that the desire to make, wear, and appreciate jewelry increases the bonding between participating individuals. This particular motivation is naturally selected on account of its positive effects on the coordination of functional group-behavior, which I believe is the sole adaptation of the entire hominin tribe. But Neanderthals may well have come to jewelry-making on their own: Spanish archaeologist João Zilhão has evidence gathered from Neanderthals living in the Iberian Peninsula, where, at that time, they had no possible contact with modern humans.

If he is right, the independent “parallel” evolution of the desire for jewelry is eminently conceivable. As I thoroughly describe in the book, the rise of the “desiring mind” in modern humans evolved to interact with the older, collective hominin mind—which then created the scaffolding for “two minds” upon which the double-consciousness necessary for symbolic thinking has evolved.

Discussion of below images:

The image on the left is a professionally rendered sculpture of a Neanderthal, and to the right is a photograph of Red Cloud, the great Sioux Chief. The fact the Neanderthal’s head appears larger in comparison to Red Cloud’s head is an artifact. Mainly note how much more appealing to us Red Cloud is. Also note the imbecilic, “friendly” grin on the Neanderthal. This is totally fiction. There is no science on the facial expressions of our ancestors. In hominins, facial expression reflect emotions. My educated guess is that the Neanderthal expression should be very similar to that of Red Cloud’s. But, mind you “off camera,” the Sioux were always joking with each other in a way that I rather doubt existed in any of the extinct hominin species. 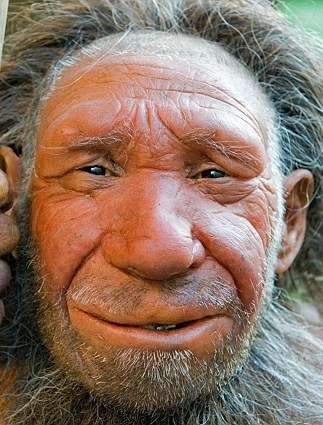 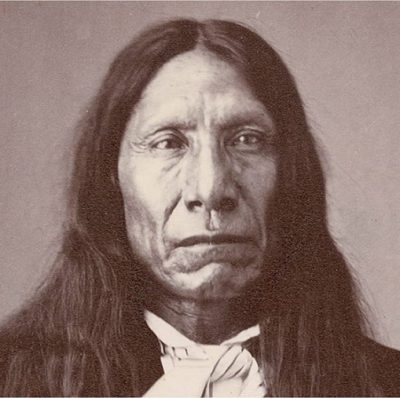