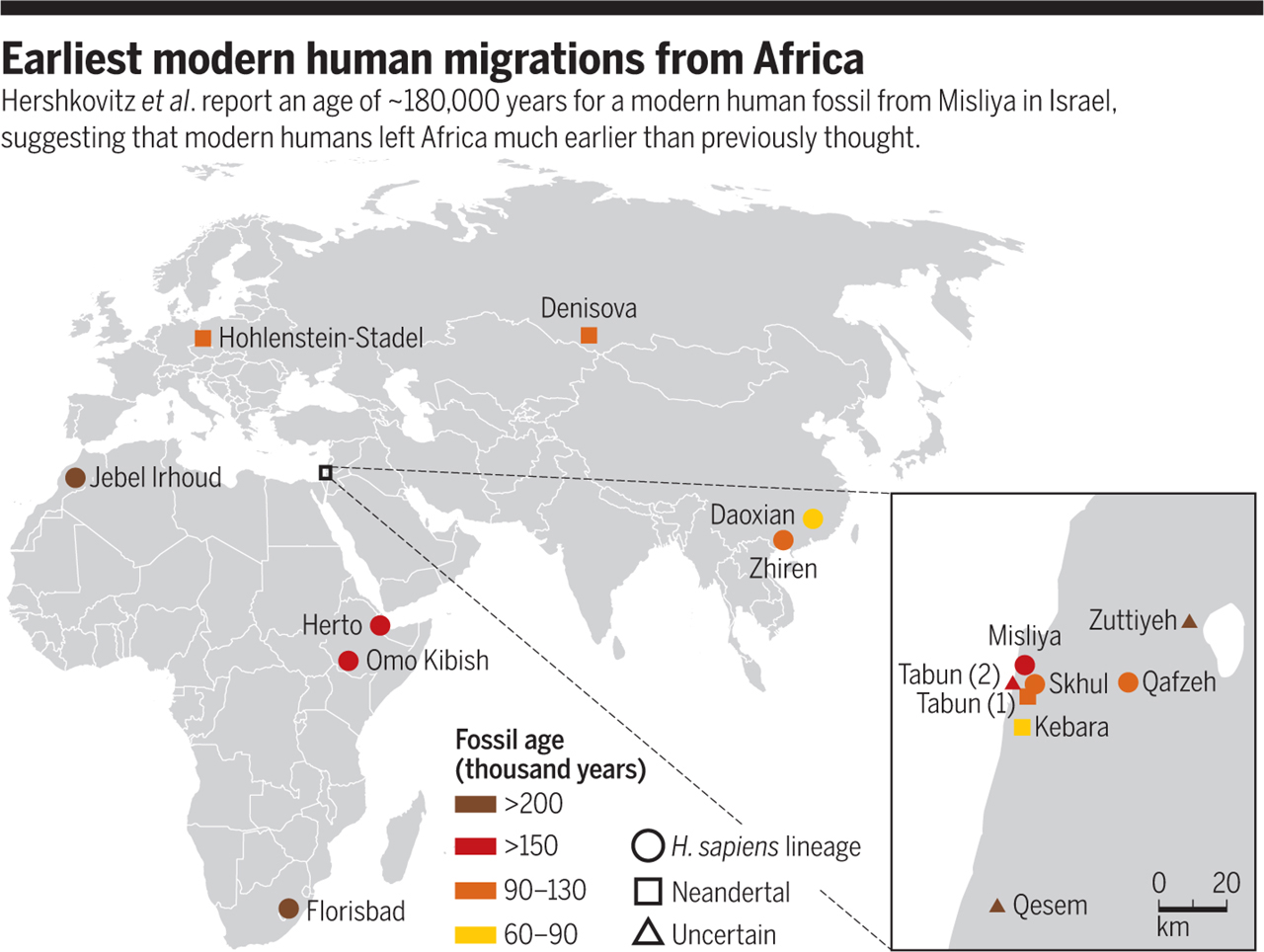 In the January 26th issue of Science, Chris Stringer of London’s Natural History Museum and colleague, Julia Galway-Witham have an article that accompanies a research paper of a major fossil find in Israel:

The skeletal features of our species, Homo sapiens, include a globular braincase, brow ridges that are divided into central and side portions, a flat and retracted midface, a chin on the lower jaw, and a narrow pelvis. Fossils showing many of these characteristics have been excavated from the Ethiopian sites of Omo Kibish and Herto, dated at ∼195,000 and ∼160,000 years ago, respectively (1). Possible more primitive members of the species are known from Jebel Irhoud (Morocco) and Florisbad (South Africa), dated at ∼315,000 and ∼259,000 years ago, respectively (1). Yet, the oldest known H. sapiens fossils outside of Africa, from Skhul and Qafzeh in Israel, have been dated to just 90,000 to 120,000 years old. On page 456 of this issue, Hershkovitz et al. (2) provide fossil evidence from Misliya Cave, Israel, suggesting that our species had already left Africa by ∼180,000 years ago (see the figure).

Misliya Cave lies on Mount Carmel, Israel, and has been excavated over the last century. It shows successive periods of hominin occupation with Lower and Middle Paleolithic tools, the use of fire, and the exploitation of a diverse fauna. Given Misliya’s position at a crucial crossroads between Africa and Eurasia, the latest discoveries have enormous potential for understanding early populations of H. sapiens in western Asia. 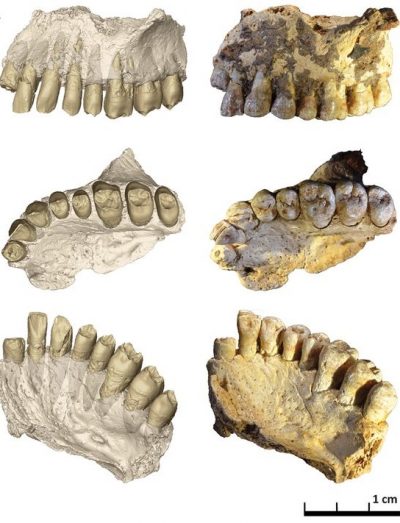 The newly excavated material is represented by a partial upper jaw (Misliya-1), which includes some of the bone surrounding the tooth sockets, part of the cheekbone, the roof of the mouth, the bottom of the nasal cavity, and the complete upper left dentition. The size and shape of the specimen fall within the known range of variation of later H. sapiens fossils. Furthermore, Misliya-1 lacks the unique diagnostic features of Neandertals and earlier hominin species.

Hershkovitz et al. note Misliya-1’s similarities to the later Skhul and Qafzeh fossils, although the size of one of the tooth cusps in Misliya-1 is reduced relative to the other fossils. Individual traits associated with the morphology exhibited in Misliya-1 are sometimes seen in other hominin taxa, but the combination of traits is characteristically that of H. sapiens.

Hershkovitz et al. dated the fossil and archaeological specimens from Misliya using multiple methods.. . .Collectively, the results of these dating methods provide an estimated age of ∼177,000 to 194,000 years for Misliya-1 and its associated artifacts.

The authors point out that there are fragmentary teeth found in other Israeli caves dating to 400,000 years ago, but that extreme fluctuations in climate during this period probably meant that earlier migrations were probably episodic and that migrations before and after the Misliya fossils were, more a “boulevard of broken dreams than a stable haven for early humans (7).”

If the Misliya population extended further into Eurasia, encountering Neandertals, this may have led to gene flow between these two lineages of humans. The main phases of genetic introgression from Neandertals into H. sapiens are estimated to have occurred between ∼50,000 and 60,000 years ago (8), but genetic analyses of Neandertal fossils from Denisova Cave (Siberia, Russia) and Hohlenstein-Stadel (Germany) indicate at least one earlier phase of introgression, from H. sapiens into Neandertals. This event has been estimated at ∼219,000 to 460,000 years ago, suggesting that it predated the Misliya fossil (9). The H. sapiens fossils from Misliya, Skhul, and Qafzeh could therefore represent relatively late excursions of our species from Africa. During earlier humid phases, western Asia could have attracted more primitive members of the H. sapiens and H. neanderthalensis lineages, providing repeated opportunities for exchanges of genes and technologies.

I have made the case in this blog over the years, and now in my recently published book, Ape Mind, Old Mind, New Mind, that the principle factor in the emergence of Homo sapiens was the evolution by sexual selection of strong motivations for “self-display” behavior (narcissism) co-evolved with equally strong motivations to be attracted to these displays. This sexually selected co-evolution of the desire for display behavior and the behaviors themselves had the overall effect of globally and progressively strengthening the bonds of Homo sapiens relative to those of the other Homo species including the Neanderthals and Denisovans.

Above all, we are the species that relentlessly and endlessly DESIRE one another.

It was these bonds, powerfully strengthened by narcissistic sexuality, that were naturally selected for their capacity for increased coordination of divided labor in hunting and gathering. Also inherent to these strengthened bonds was increased sexual competition leading to group fission and migration. Our inclination to migrate into every conceivable ecological niche (it took the earliest Americans only several thousand years to populate both continents) has been intrinsic to the very essence of the unique motivations that arose to distinguish us Homo sapiens some 300,000-plus years ago, and perhaps even earlier as suggested above. 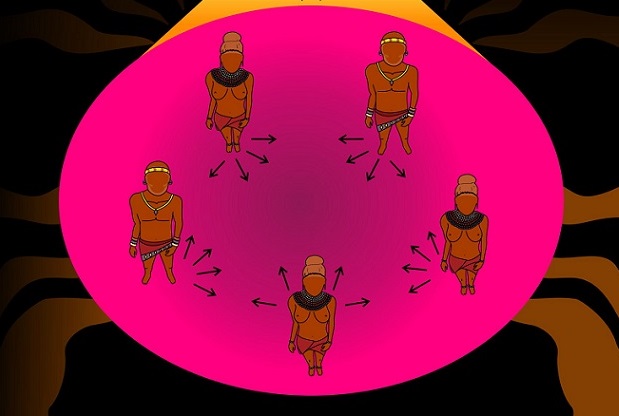 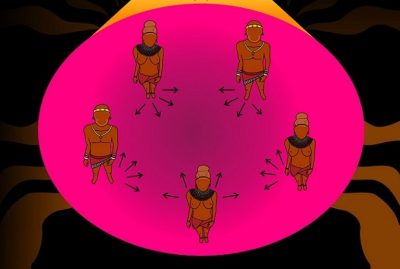