Psychologist Michael Tomasello recognizes that, because all the minds of our ancestral species have gone extinct, the only way we can scientifically approach how the mind of apes evolved into our own is to comparatively study the minds of apes and developing children to ascertain what is exclusively human in human nature. In Becoming Human: A Theory of Ontgeny (2019), Tomasello successfully demonstrates that collective consciousness (1) is unique to humans based on comparative studies of apes, and (2) has genetic roots and is not just a by-product of culture (which, of course is collective through-and-through). He has come to this conclusion based on the predictable timing across cultures of the  unfolding of shared intentionality arising at 9 months old (“Let’s both look at that pretty bird”) and collective intentionality, starting around 3 years old (“That is the right way we ought to do it”). So I differ from Tomasello only on when and how collective consciousness arose, not on its significance.

Although Tomasello doesn’t specify when human collective consciousness arose, he assumes that it was a somewhat recent phenomenon, perhaps 400,000 yrs ago with big-game hunting as some have suggested. He accepts that it was an adaptation selected for the benefits of teamwork, but then he encounters the difficult problem that I avoid, which is having to describe exactly how the transformation from individual to collective conscious was accomplished:

Coordinating with others on shared goals in the context of collaborative foraging . . . was very likely the adaptive challenge leading to humans’ unique forms of cooperative communication and recursive mind-reading . . . [which is] recognizing, recursively, how the partner is thinking about how she is thinking about his thinking, and so forth.

Here we can begin to glimpse the difficulties in crossing the Rubicon from an individual to a collective consciousness within the paradigm of individual-level natural selection for cognitive capacities. My basic problem with this recursive mind-reading theory is that I just don’t think kids are that smart. To me it’s all emotional: shared intentionality is primarily a feeling of oneness on the part of both the parent and nine-month-old which produces a single shared motivation that in reality does derive from their relationship.

Considering a shared and collective human agency as grounded within its own evolutionary trajectory presents a simpler more parsimonious path than the calculations of perspective taking and recursive mind reading, which makes the whole thing more complicated than it really is. Anne moves the ball from the basket where Sally, who left the room, placed it. The kids know when Sally returns she has a false belief, not because they are thinking it all through, but because they are hatching into an ancient human motivation which has been evolved to seek that which is both right and true for all–considered equally. The kids know that Anne switching that ball is a sneaky thing to do, and they are eager to set Sally’s false belief right.

Based on but going beyond this ability to simulate the perspectives and values of other individuals is the ability [of the child] to self-regulate using supraindividual social structures [a.k.a. superego*].

In viewing the process through these cognitive capacities, the ultimate source of collective intentionality behind the whole transformation remains rooted in the individual child’s own “ability to self-regulate using supraindividual social structures” (which strips them of agency). In my view, it is the reverse: it is the collective intentions that have been selected to use the child for the benefits of teamwork. A collective consciousness has been broadly rooted in the ground of being human from the very beginning. Nevertheless, in one of his rare philosophical passages Tomasello does recognize the significance of this momentous transformation he is attempting to explain.

As a final attempt to characterize the monumental transformation of human ontogeny that shared intentionality has effected, let us invoke the grand evolutionary scheme of Maynard Smith and Szathmáry (1995). They identified eight major transitions in the evolution of complexity of living things on planet Earth, including everything from the emergence of chromosomes, to the emergence of multicellular organisms, to the emergence of human culture (see also Wilson 2012). Remarkably, in each case the transition was characterized by the same two fundamental processes: (1) a new form of cooperation with almost total interdependence among individuals (be they cells or organisms) that creates a new functional entity, and (2) a concomitant new form of communication to support this cooperation.

* I cannot but wonder at what Carl Jung would have thought of Tomasello’s speculations in light of these testy remarks about Freud: 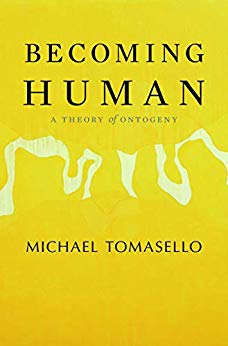