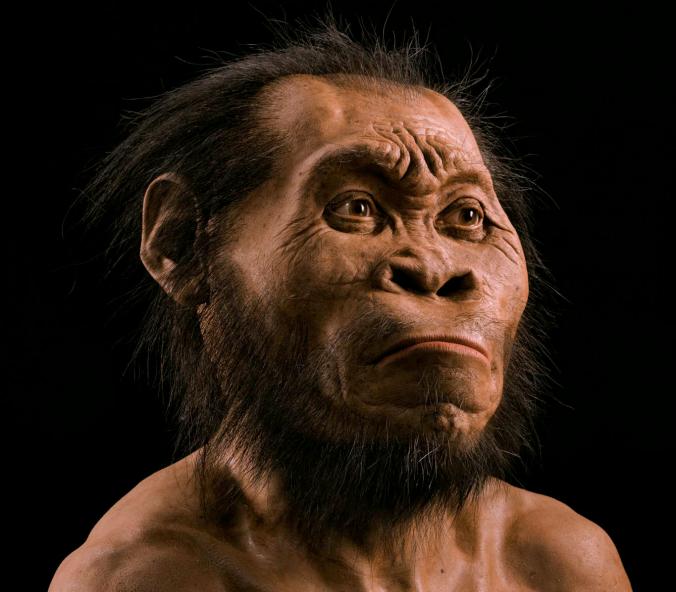 Due to its earth-shattering importance, I am reproducing this from the 9/11 issue of Science, written by Ann Gibbons

From the moment in 2013 when paleoanthropologist Lee Berger posted a plea on Facebook, Twitter, and LinkedIn for “tiny and small, specialised cavers and spelunkers with excellent archaeological, palaeontological and excavation skills,” some experts began grumbling that the excavation of a mysterious hominin in the Rising Star Cave in South Africa was more of a media circus than a serious scientific expedition. Daily blogs recorded the dangerous maneuvers of “underground astronauts” who squeezed through a long, narrow chute to drop 30 meters into a fossil-filled cavern, while Berger, who is based at the University of the Witwatersrand in Johannesburg, South Africa, became the “voice from the cave” in radio interviews.

When it came time to analyze the fossils, Berger put out a call for applications from “early career scientists” to study them at a workshop in Johannesburg in March 2014. Handing over much of the analysis of such potentially important specimens to inexperienced researchers didn’t inspire confidence among Berger’s colleagues either, though it did win him the nickname Mr. Paleo democracy. Many thought the expedition “had more hype than substance,” paleoanthropologist Chris Stringer of the Natural History Museum in London writes in a commentary accompanying the fossils’ official presentation this week in the journal eLIFE.

But the substance has now been unveiled, and few dispute that the findings are impressive. In their report, Berger and his team describe 1550 fossils representing more than 15 ancient members of a strange new kind of hominin, which they named Homo naledi. (Naledi means “star” in the Sotho language spoken in the region of the cave.) It is the largest trove of fossils of a hominin ever found in Africa—and more await excavation at the site, 50 kilometers northwest of Johannesburg. “Lee has to be congratulated for finding this stuff,” says Fred Grine, a paleoanthro pologist at the State University of New York at Stony Brook.

Cavers found 26 of the 27 bones in this hand, which has modern and primitive features.
PHOTO: JOHN HAWKS

Although the fossils are still undated, making it hard to know where they sit in the human family tree, they already reveal a profoundly different way to be a member of our genus Homo. “There is no doubt in my mind that this is a new species,” Grine says.

As soon as spelunkers led by Pedro Boshoff, a former student of Berger’s, found a handful of ancient teeth and a jaw deep in the cave’s Dinaledi Chamber in September 2013, it was clear that “something bizarre was going on,” Berger says. This ancient individual had small front teeth like a modern human but larger molars like a more primitive human ancestor.

When the spelunkers brought up more remains, Berger’s perplexity deepened. The skull was globular, like a member of our genus Homo, but the brain was small and primitive. The wrist suggested this species was an adept toolmaker, but its shoulder and fingers showed it still climbed in trees, like more primitive hominins. “We were facing something that was different from anything else that had been described,” Berger says.

At first, he worried that something was wrong with the excavation or that the teeth came from more than one type of hominin. Much to his frustration, he couldn’t check the dig for himself, because he couldn’t squeeze down the 20-centimeter-wide natural chute that led into the cavern (see diagram, p. 1150). With a quick grant from the National Geographic Society, where he is an explorer-in-residence, Berger assembled a team of thin, young researchers and cavers to excavate further.

“As the teeth came up, you’d see this odd tooth; then the same thing in two, three, five, 10, 50, 100 teeth,” Berger says. “No individual part varied.” Other remains—skulls, hands, and foot bones from infants, teens, and the elderly—also consistently showed the same unusual combination of modern and apelike traits. But although the similarity of the fossils convinced the researchers that they had uncovered a new species, analyzing all 1550 was a Herculean task. “No one had ever tried to publish more than 100 fossils of a single species at once,” Berger says.

In the end, the work of more than 60 researchers yielded a picture of “a relatively tall, skinny hominid with long legs, humanlike feet, with a core and shoulder that is primitive,” Berger says. Some body parts have come into sharper focus than others. In an analysis of the remarkably complete hands, paleoanthropologist Tracy Kivell of the University of Kent in the United Kingdom found that bones in the wrist were shaped like those in modern humans, suggesting that the palm at the base of the thumb was quite stiff. That would allow forces to dissipate over a larger area of the hand than in more primitive humans—a trait associated with tool use. At the same time, H. naledi had a weird thumb and long, curving fingers, as if it still spent a lot of time climbing.

In a separate analysis of the foot, paleoanthropologist William Harcourt-Smith of the American Museum of Natural History in New York City and his colleagues noted that its proportions were modern and the big toe was aligned with the other toes, rather than diverging like an ape’s grasping big toe. Taken together, the hand and foot suggest “you have a creature that would have walked upright really well but also would have been comfortable in the trees,” Harcourt-Smith says. Harvard University paleoanthro pologist Dan Lieberman agrees: “The foot is indeed strikingly modern … and suggests it walked and possibly ran much like modern humans.”

No other animals were found in the subterranean chamber except a hapless owl and a few rodents. As a result, the team rules out the idea that animals dragged the human remains into the cave. Instead, they suggest that other humans, perhaps modern humans, deposited the bodies there—as in a crypt. But the team can’t rule out alternate explanations—for example, that a group of H. naledi found their way into the cave but got lost or trapped.

Despite the wealth of data, the initial analysis invites more questions than it answers, Stringer writes, including “Where does H. naledi fit in the scheme of human evolution?” Determining the age of the bones or cave would help answer that, but caves are notoriously difficult to date, and the bones may be too old for radiocarbon dating.

Still, “it is absolutely essential that the remains be dated,” says paleoanthropologist Curtis Marean of Arizona State University, Tempe. “For example, if they date to the last 300,000 years, then it is plausible that early modern humans killed them and stashed them in the cave as part of a ritual.” A date would also illuminate whether the fossils represent an ancient population or an isolated relic that persisted until fairly recently, says paleoanthropologist Bernard Wood of George Washington University in Washington, D.C.

Berger says now that his team has described the fossils, they can focus on dating them, trying to extract DNA, and extending his exercise in paleodemocracy by recruiting still more young researchers to the effort. “The Rising Star expedition isn’t a media stunt,” Berger says. “I felt it was the first time in history to bring the entire world into a place where we discovered a hominid fossil.” 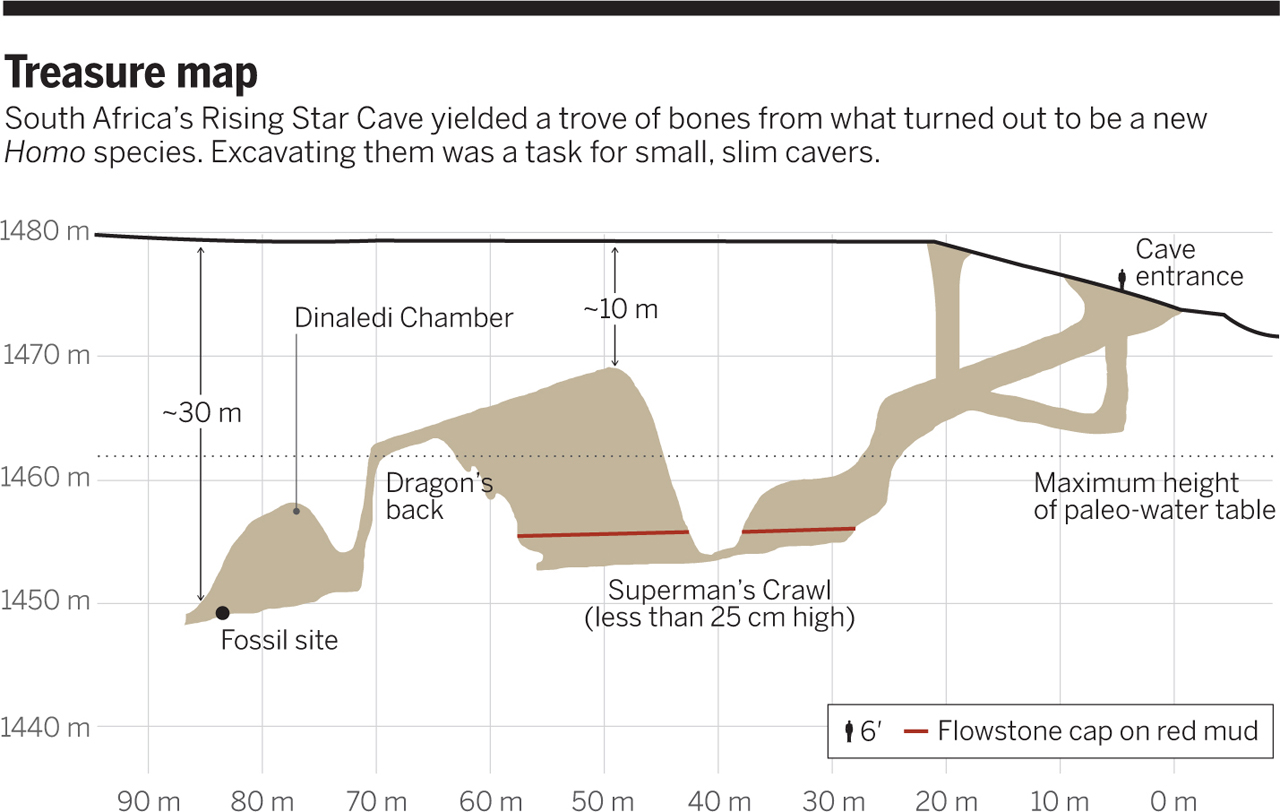 2 Comments on “Meet Another Cousin”