I grew up in New York City, the son of a physician. As a boy I had a Jewish friend who told me that his father was a Marxist, and, of course, I hadn’t the foggiest idea what that was. So I was very curious to meet this exotic man when my friend invited me to his house. When we sat down to dinner, I remember being somewhat intimidated by his remote father as my friend’s mother initially carried the conversation with very welcoming questions about what I was interested in and the like. But, after a lull in the conversation, he looked at me squarely and asked very pointedly what my father did for a living. Not knowing what to expect, I anxiously reported that he was a doctor. Much to my surprise, his demeanor entirely changed, and he became wreathed in smiles of approval, “Well then, Johnny! He’s one of us.” He didn’t elaborate on his enigmatic statement. I went home and told my father, who was very amused, and I think pleased by the comment, but, if he tried to explain it to me, I don’t remember it. My friend had no idea what his father was talking about either. But the incident hung in my mind for years until I got around to reading some Marx and figured it out. He considered that my father was a “worker” because he made his living from his own labor as opposed to exploiting the labor of others. Back then doctors owned their own labor.

Recently, having been retired from the practice of psychiatry for almost a decade, I went along with my wife’s mother to her doctor, and we chatted during the examination. He said that he had resisted being bought out by a large hospital-owned practice and was still on his own, to which I replied, “Yea, I’d rather be regulated than owned.” In fact, I pride myself that, during 35 years of practice, I had never been owned (excepted at the beginning on my career when I worked in a state prison). However, during the last decade of my practice I had occasion to talk to many doctors in my office about the alienation they experienced in response to someone else owning their labor. Alienation was Marx’s term, and as a psychiatrist, I am still taken with the penetrating power of his insight into the transformation that takes place when one’s labor becomes owned by a businessman: 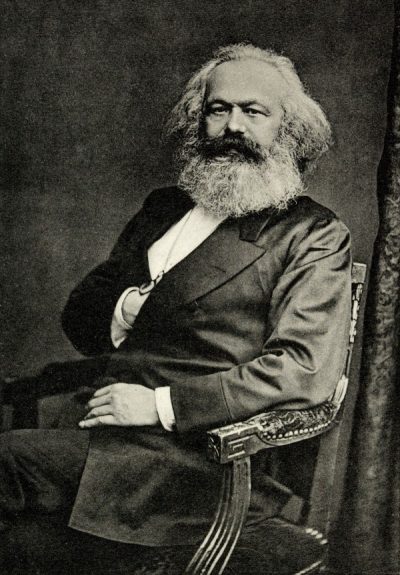 The doctor-patient relationship has a much longer history than capitalism. I see younger colleagues heroically resisting massive forces to “objectify” and “externalize” this most sacred, intimately subjective and interior human exchange.

Do not rule out the medical profession taking back our labor one day, perhaps when we fully realize that “we have nothing to lose but our chains.”

One Comment on “Karl Marx and the Alienation of Doctors”