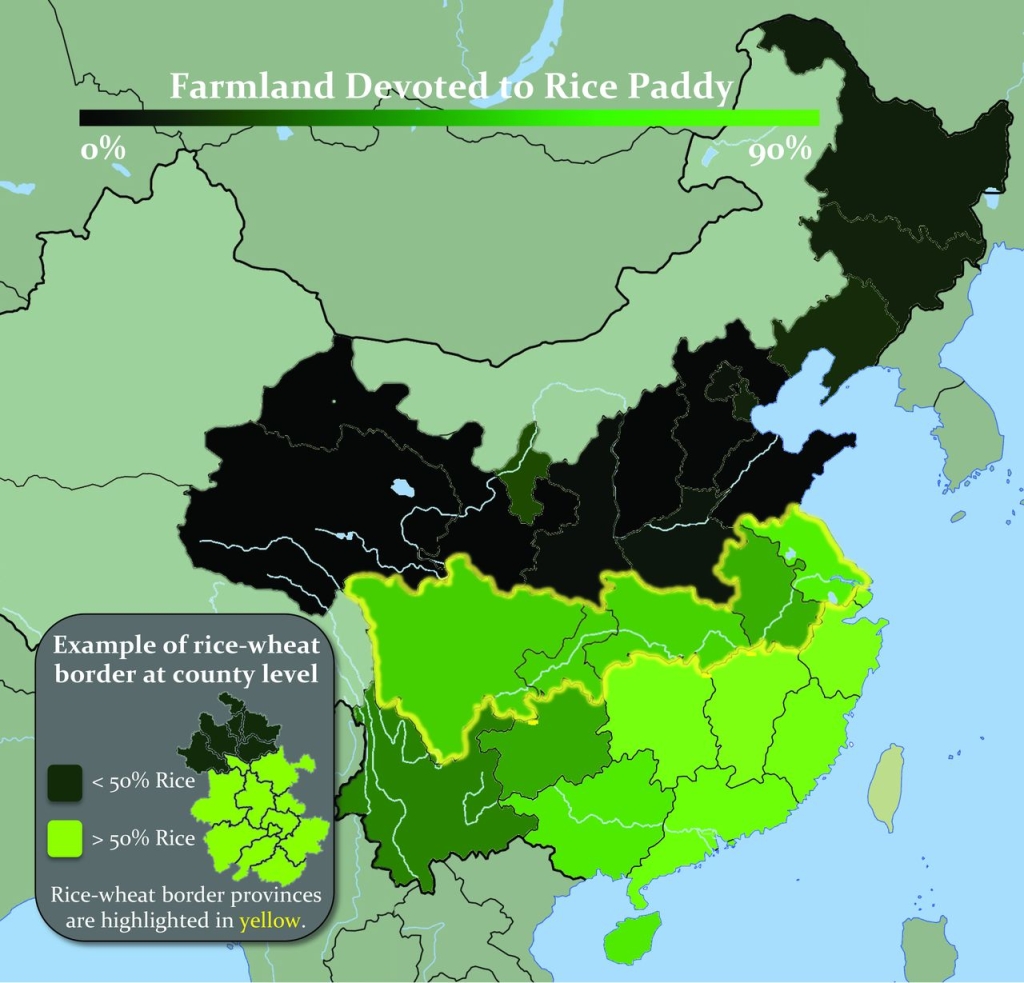 In this weeks Science, there is a major article on the impact of farming rice vs. wheat on psychology. The bottom line is that, partially because the need for extensive irrigation systems necessary to grow rice paddies in standing water require the cooperation of many families, whereas cultivating wheat does not require nearly so much labor or cooperation. The article contains impressive statistics that people in China from predominantly rice growing areas are more holistically and communally oriented and less analytical and individualistic as graphically illustrated below.

In the middle panel the participants draw circles to represent self and friends: Americans draw themselves about 6mm bigger than others, Europeans draw themselves 3.5mm bigger, and Japanese draw themselves slightly smaller! The panel on the right demonstrates that collective cultures draw sharp distinctions between friends and strangers. Americans are much more likely than Asians to punish their friends for dishonesty.
An accompanying review article goes so far as to speculate that this might be a reason that the industrial revolution started in wheat-growing Europe rather than rice-growing China – which I think a stretch. Two other theories are that collectivism correlates with historical pathogen prevalence (warm weather go with both rice & pathogens) and that individualism is a result, not a cause of modernization, refuted by long modernized Japan, South Korea and Honk Kong which remain with interdependent mentality.

The authors point out that divorce and violence go along with the individualistic mindset, which also is associated with herders. There is evidence that regions in the U.S, settled by Scottish and Irish herders mainly in the South many generations ago persist in having more violence. One of the reasons that John Brown’s raid at Harper’s Ferry sent such a shudder through the South is that his fanatical chauvinism spoke directly to their ethos.

Two principles struck me in this article. The main one is that social structure, determines mental structure. The direction is from the outside to the inside. This is one of the earliest insights I had with respect to evolution. The minds of primates reflect their dominance hierarchies, and the minds of pre-human hominins for the past 6 million years have been shaped by a communal social structure because of its productivity in the context of small groups.

The other principle is that these two mentalities are two basic yin and yang mindsets in humans and are present in all of us to varying proportions. That is why they are so enduring. They both are good and bad. We put such a high value on Individualism, which makes us more analytic and creative, but also violent, avaricious, and narcissistic. It is our communal nature that separates us from the rest of primates. If we had not evolved deep instincts for justice and fairness, over many millions of years, we would still be ultra individualistic monkeys analyzing each others’ ranks in our little hierarchies. We should strive as cultures and individuals to find a golden mean.