I just finished Lee Berger’s Almost Human. It is a passionate first-person account of his monumental fossil find: Homo naledii, and also describes his other spectacular find, Australopithecus sediba, both in proximate locations in South Africa. Berger has a very straight-forward writing style that lends the weight of common sense to his side of the controversy that has swirled around him. He has been critical of researchers like Berkeley’s Tim White, who kept the major Ardipithicus ramidus finding secret for a decade. I had thought him to be a native South African because of his chauvinism with respect to proving S.A. to be the equal of the East African sites made famous by the Leakeys. Berger strikes a good balance with brevity in describing his youth in rural Georgia, and how he obliquely found his calling in paleoanthropology.

Both finds are unique in the abundance of fossils, crucially including not just near complete skulls, but also complete body, or “post cranial” skeletal fossils. Berger’s believes that the overall significance of both these finds is the fact that these post cranial features highlight a mixture, or “mosaic,” of archaic (ape and early human-like), and the “derived” human features of the Homo genus. The evolution of the human body did not move towards what Berger calls the “human adaptation” altogether, but different parts moved at different speeds: the skull, spine, hands, shoulders, ribcage, pelvis, legs and foot. Berger attributes this to the periodic mixing of species within Africa. He uses the metaphor of a “braided stream” repeatedly dividing and coming back together again: “Branches formed and flowed separately for some distance before they merged again with the growing river as it flowed on to today.” 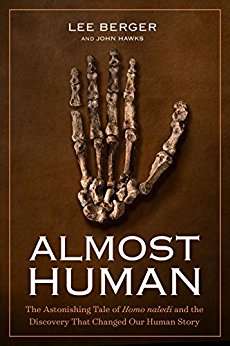 Is not this a partial step back in the direction of the old “ladder of evolution” notion? He doesn’t elaborate in the book how this would work, but presumably species would evolve separate clusters of human adaptations, and then go through a periods of mixing in which two species would fill in each other’s non-derived traits and “nudge” them both forward until they split again.

Behind all arguments about human evolution lies the issue of our uniqueness from other animals. On the face of it, our human tribe, hominins, is wildly unique in nature with respect to the swiftness with which all of our many species in several million years converted from near herd ruminants like sheep in the early hominins into the genus Homo species, who hunted in a coordinated fashion, like wolves—but with tools. We know that the temperature was getting colder and drier, and forests were becoming savanna with burgeoning other herds of other ruminants ripe for predation. The central question in my mind is whether the human adaptation is something that could be conceived to be “created” strictly by the interaction between the individual and the physical environment.

Everybody realizes that intense cooperation has been central to the human adaptation. As brilliant and innovative as he is as a paleoanthropologist, Berger toes the party line on how cooperation evolved. In a somewhat rote manner, he recites the half-century dogma of kin selection (nepotism) and mutual back-scratching reciprocity as the reason for the evolution of cooperation. This is pure speculation without any direct evidence, because all these species have gone extinct, and behaviors like cooperation, and relational experience in general does not fossilize. Indeed, the basis of E. O. Wilson’s philosophical writings is the premise that our road to cooperation closely resembles highly cooperative, so-called eusocial insects like ants and termites. Perhaps there is a systemic bias to all ethology (comparative biologists such as entomologists or primatologists) in the direction of believing that there is nothing new under the sun, because, if there have been unique aspects to human evolution, that field would be diminished in its power to address it.

Berger tells us that Louis Leakey had, “based the idea of Homo upon a common set of adaptations. Tool use, more humanlike hands, a larger brain, smaller teeth— all these things together indicated a new pattern of life, one that set our ancestors on a human path.” There are feet adapted to traveling long distances, pelvises for the same reason plus giving birth to larger brains, rib cages for respiratory endurance, and of course hands with opposable thumbs for constructing and manipulating tools. I assume he believes that mutational changes of each separate body-part had incremental survival advantages for the individuals possessing them relatively independent of other body parts, or, more likely, clusters of body parts synergistically co-evolved together. It is always well to remember Darwin’s constant refrain: each incremental micro-step of the natural selection of a trait must itself confer small benefits in order to be selected. Many scientists have taken Darwin’s insistence on this point to be a General Law, which, once and for all, banishes Aristotelian teleology—final causes toward which evolution is “pulled.”

Dr. Lee Berger is a staunch advocate of open access to his work as quickly and widely as possible (as opposed to White); by dint of extraordinary effort, he has put his work into the public domain in record time with the laudable intention of stimulating thought on his extraordinary findings. Here I employ Dr. Berger’s monumental fossil find, Homo naledi, to argue afresh the ancient Greek view that human evolution has responded, and continues to respond, to a Platonic ideal of justice.

Dr. Berger deliberately set about characterizing the naledi fossils before he could date them; he thought he was looking at fossils from the same period as A. Sediba, about 2 million years ago, when Homo species first appeared. Somewhat out of sync, the brain is on the small end for a member of the Homo species. Berger describes, “Their teeth were adapted for a high-quality diet, like all members of Homo. Their body size, and in particular their legs and feet, were humanlike. All three were key aspects of the way that humans and our close relatives have worked, moved, and lived within the environment. Besides this, the shape and features of the skull were distinctly humanlike. The small brain and primitive features of the skeleton were important, but they did not detract from the overall picture. This was Homo.”

The climax of the book is Berger’s extremely convincing deduction that this species used this ancient cave as a burial receptacle, mainly based on the large numbers of pristine fossils and the absence of any other fauna (previous modern cavers had disturbed them somewhat). While it is still debated, Neanderthals engaged in burial, but this practice is squarely a Homo sapiens behavior. So how could this two-million-year-old early Homo species be “drawn” to this ultra-derived, most human of behaviors? What incremental benefits would early manifestations of this behavior offer?

I ask you to temporarily lay aside the mind-twisting task of conceiving of human evolution to be the result of classical “bottom-up” natural selection of gene mutations for physical traits in direct response to the physical environment. The complexity called forth by Lee Berger’s finds beg for the simpler solution that I have long espoused in this blog.

For those new to the blog, my narrative of human evolution majorly evokes Darwin’s theory of sexual selection plus a variation on his theory of group selection, along with classical natural selection to unify Berger‘s findings. Here is the passage that appears on the back of my book concisely describing it.

The real kicker in Almost Human comes at the very end: only months ago, just before the publication of the book, his team finally dated the naledi fossils not to millions of years ago, but to about 300,000 years ago—which is also the brand-new date for Homo sapiens since the dating of fossil findings in Morocco posted here.  Did H. naledi learn this behavior from H. sapiens? I suggest something very different.

I propose that it doesn’t take a large brain, given enough time, to derive behaviors that express the reality that, from the very beginning 6 million years ago, the  central feature of human evolution is that it is an adaptation to the naturally evolved communal human spirit that demands the Platonic ideal of justice. 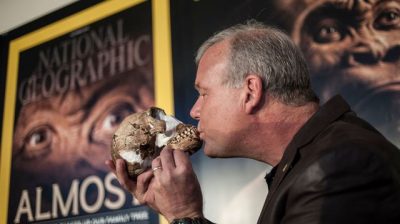