The species of our Genus Homo eventually became predominant hunters because they refined instincts for justice as an “immune system” against individual dominance, which is a pathology for organic teamwork. Modern hunter-gatherers are egalitarian (Pringle, 2014), and justice (punishing dominance) has been observed in far-flung hunter-gatherers,not influenced by wealth-creating agricultural practices (Boehm, 1999). There have been many proposals as to how justice and egalitarianism could have evolved within the game theory paradigm of competitive strategic transactions among self-interested individuals for scarce resources, but the following is the simplest and the most parsimonious way to unite the evidence.

Scots economist and moral philosopher Adam Smith is well known in his Wealth of Nations (1776) for attributing wealth to the division of labor, the self-interest of individuals being guided into productive engagement by an “invisible hand.” Smith is less known for his Theory of Moral Sentiments (1759), in which he singles out justice as the one moral sentiment indispensable to productive social functioning. A straightforward evolutionary interpretation of Smith’s profound thinking is that the invisible hand is the naturally selected collective capacity to coordinate labor, and that the coordination of divided labor is the principal human adaptation. Justice is the one virtue indispensable to productive social engagement because justice is the collective instinct that has been naturally selected to allow the benefits of productive social engagement to thrive. We have prevailed upon this planet not as individuals, but because we have been endowed by our noble ancestors with the capacity to engage in ever more elaborate teamwork, and it has been the natural selection for felt instincts for the rules of justice that has permitted this organic social system to take root and blossom. 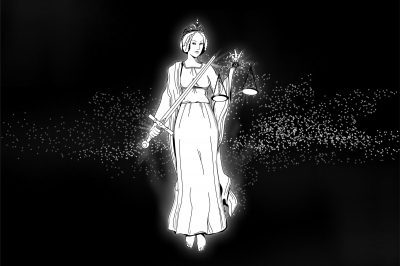