Last night I was inspired to write this blog as a watched a documentary on PBS about how a million children are exploited in deep hand-dug gold mines in West Africa.

A little background: perhaps the biggest “aha” moment in my life occurred when I realized that the manic portion of bipolar disorder is an “emotional fossil” for all that was exclusively evolved in human nature. This discovery came relatively late in my thirty-five years of examining various mental illnesses for the clues they held for human evolution. From studying various forms of depression, panic disorder and schizophrenia, I had deduced that pre-human hominids had evolved a strong form of group selection resulting in the development of a communal group consciousness much like Carl Jung had conceived. So I really hadn’t gotten around to thinking about Homo sapiens yet when I read Geoffrey Miller’s Mating Mind over a decade ago proposing that a major force in human evolution is sexual selection – similar to the selective mechanism that produced the peacock’s tail. Bells began going off in my mind. Sexual selection neatly places a Darwinian dimension onto Sigmund Freud’s celebrated observation that human motivation is loaded with sexuality. But mostly my mind flashed to mania in which hyper-sexuality is a common feature…

Then the aha moment: another cardinal symptom of mania is the extraordinary hyperactivity in the production of language, the cognitive complexity of which marks it as a recently evolved capacity. It became clear to me that mania is an illness that places into exaggerated relief all the exclusively human foibles, which can most generally be characterized as vanity. We humans are extraordinarily driven to achieve the pleasure of being admired by other humans.

The point of this post is to highlight one particular facet of our peculiar penchant for sexual display, which is body ornamentation The earliest cultural artifacts from around 100,000 years ago found in both the north and south of Africa (with trade routes in between), as well as in the Levant, are pierced shells and red ocher, clearly used as body ornaments. It was natural for gold to become the most valuable commodity for humans because its shining luster does not tarnish, making it the ideal body adornment. Underscoring the value humans place on gold—think of the gleam of Tutankhamen’s three nested coffins (Egyptian gods were thought to have flesh of gold) and the stacks of ingots in the coffers at Fort Knox—is the fact that 78 percent of gold continues to be used for jewelry.

I think it is most salubrious to place those exploited children in Africa in the context of the peculiar nature, and, yes, the downright silliness of this human passion to ornament our bodies with gold. Think of the mentality of all the men who rushed out to California in the 1849 gold rush or the tortuous trek to Alaska in the 1890s. These men were seized by a unique fever – more than just striking it rich. The whole enterprise is at its root so outlandishly childish – the idea that we can wear a shiny piece of metal and imagine that it  magically transforms us into an object to be admired, desired, or even envied.

“What a piece of work is man.” 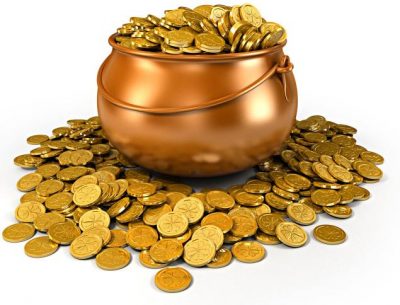