Months after my birth in 1941, Roosevelt secretly met with Churchill at Argentia,

Newfoundland with the storm clouds of world war ominously looming.   With British and American battle ships lashed together, the sailors all sang “Onward Christian Soldiers.” Although that battle song would be stricken from the hymnals following the war, this was a luminous prologue to a Crusade of evolutionary proportions.  Then, the day after Christmas following the attack on Pearl Harbor, Winston Churchill addressed a thunderous joint meeting of the Congress of the United Sates:

“Sure I am this day we are masters of our fate, that the task which has been set before us is 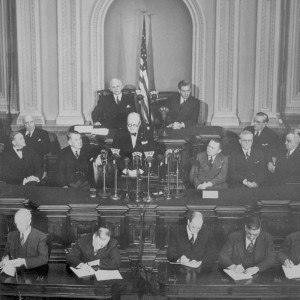 not above our strength; that its pangs and toils are not beyond our endurance.  As long as we have faith in our own cause and an unconquerable will to win, salvation will not be denied us. In the words of the Psalmist, ‘He shall not be afraid of evil tidings; His heart is fixed trusting in the Lord'”

Despite the depth of his conservative and ethnocentric instincts for his beloved island nation, Churchill, like it or not, realized that era had to pass, and that the future lay with the New World Order represented by America.  He knew with America the war was not going to be won on the Old World basis of national pride or defending territory, and that he had to appeal to something that lay much more deeply rooted in the human spirit.

World War II was an all-out test of two visions of human nature.  It is as simple as the old saying that right makes might and that righteousness is not just freedom from tyranny but obedience to the Force of God that transformed the laws of the jungle into the rule of justice – not just for the individuals within a group – but between groups of groups and the all the individuals within them.

However, no other passage that I have ever read expresses more eloquently or accurately, within a concrete context, the role of God in history than the following meditation that our greatest president, Abraham Lincoln, offered up in his second inaugural address shortly before his assassination. Click on Lincoln to read.

One Comment on “God FAQ: How Do We Know God is Still Alive #4: American Civil War & World War II – “Salvation shall be not denied us if our heart is fixed, trusting in the Lord.””