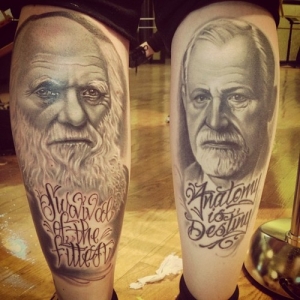 Freud’s ideas (also referred to as psychoanalytic ideas) are sometimes discounted by modern psychiatrists who have turned to medications as their central treatments, but the topic of this blog is philosophy, not medicine. For over fifty years, his paradigm attracted the finest minds in the field who contributed to by far the most dynamic and intellectually stimulating era in psychiatry.

The issue that intrigued me most was the psychoanalytic perspective about how the superego is instilled in the child’s mind (about which I have previously posted). A firm understanding of this process in the Freudian paradigm became vitally important to me as I entered into the world of Darwin, because I became convinced that it held important information about how pre-modern human Homo species communicated and spread their Hand ax culture (about which I have also previously posted). I believe that the maxim, “ontogeny [the development of the child] recapitulates phylogeny [the evolution of the species]” pertains more to the mind than the body. 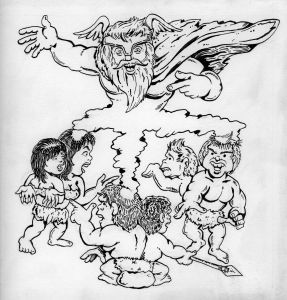 Freud’s “topography” of the mind is directly applicable to a Darwinian view. The id represents the dominance–submission interactions of pre-hominin primates, including promiscuous sexuality. The superego represents obedience to the authority of groups that I believed evolved in hominins by means of a decisive shift to group selection. Crucial to the understanding of how psychoanalytic thinking informs Darwinian thinking is the following distinction. The Freudian paradigm is a self-contained system that has the burden of explaining causal psychic mechanisms of childhood development. When one regards Freudian insights from a Darwinian perspective, that burden of psychic causality is removed, because the reason for the superego is relegated to its natural selection 6 million years ago due to the advantages for group survival. Seen in this new light, the growth of the superego in the child becomes the unfolding of a fossil of how our pre-modern human ancestral species communicated their culture, which can be closely examined.

A central example of this distinction is Freud’s celebrated oedipal complex. In this nursery-room drama the roughly five year-old boy falls in love with his mother and has fantasies of killing his father. As a result of these fantasies, the youngster further fantasizes that his father will castrate him in retaliation! The resolution of this dilemma is for the child to identify with his father, giving up his sexual desire for his mother. This primary identification then expands into identifying with the social prohibitions represented by the superego.

From a Darwinian perspective, the entire causal logic of the oedipal psychodrama becomes an unnecessary “just so story.” The real importance of Freud’s observation is that during childhood, id impulses are suppressed by obedience to group authority. Nevertheless the process of the child 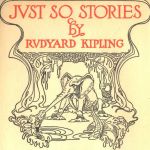 identifying, meaning psychologically becoming the father (and other authority figures), does give us a way to understand empathetically how this evolutionary shift to group selection took place. After identifying with the father, the child experiences his own primate impulses as threatening and is motivated to suppress them in himself and others. This process of acculturation through identification seen in children gives us insight into the social system and culture of our hominin ancestors.

The total suppression of primate dominance-and-promiscuous sexuality is what is so difficult for us modern humans to accept because it is obviously only partially suppressed in ourselves and we have an awareness of both our id impulses and superego rules. However, from within a Freudian paradigm, it is the position of the Narrative of human evolution in this blog that for the entire 6 million year history of our Hominin Tribe up until 200,000 years ago, our sole consciousness was tantamount to a collective superego.