Figures taken from the April 9th issue of Science: “The primitive brain of early Homo”

The brains of modern humans differ from those of great apes in size, shape, and cortical organization, notably in frontal lobe areas involved in complex cognitive tasks, such as social cognition, tool use, and language. When these differences arose during human evolution is a question of ongoing debate. Here, we show that the brains of early Homo from Africa and Western Asia (Dmanisi) retained a primitive, great ape–like organization of the frontal lobe. By contrast, African Homo younger than 1.5 million years ago, as well as all Southeast Asian Homo erectus, exhibited a more derived, humanlike brain organization. Frontal lobe reorganization, once considered a hallmark of earliest Homo in Africa, thus evolved comparatively late, and long after Homo first dispersed from Africa.

However, Dean Falk in Frontiers of Human Neuroscience, 01 May 2014 states that “. . . Australopithecus endocasts reproduce a middle frontal sulcus that is derived toward a humanlike condition compared to apes, which suggests expansion and reorganization had begun in the middle frontal gyrus by at least the time of Australopithecus africanus (i.e., ~2.5 to 3.0 mya). The shape of the inferior frontal gyrus in australopithecines is also derived in ways that are consistent with a similar trend for that part of the brain, perhaps in conjunction with reorganization of Brodemann’s area (BA) 45 (Carlson et al., 2011), BA 47, and BA 44. This paper also presents new information about the frontal lobe of MH1 (A. sediba, ~1.9 mya), and concludes that it is similar to the frontal lobes of other australopithecines.

So, the reorganization in the frontal lobe, which is the substrate for “advanced” social cognition, was already underway before Homo in the australopithecines. The blog maintains that the shift to collective social cognition described in (link to) this essay initiated the hominin tribe six million years ago, and that the changes described below were a progressive acceleration in the same direction.

In modern human brains, the inferior frontal lobe is an important neurofunctional substrate for advanced social cognition, toolmaking and tool use, and articulated language (2, 47, 48). We may thus ask whether its evolutionary reorganization around 1.7 to 1.5 Ma was accompanied by major changes in technocultural performance. The earliest evidence for Mode II (Acheulean) technocultures (hand ax) in Africa [1.76 Ma (49, 50)] largely coincides with incipient frontal lobe reorganization, and Mode I and Mode II lithic technologies were used concurrently during the critical time period (51). We hypothesize that this pattern reflects interdependent processes of brain-culture coevolution (52), where cultural innovation triggered changes in cortical interconnectivity (4, 53) and ultimately in external frontal lobe topography. On the other hand, the cerebral innovations that characterize Homo at ~1.5 Ma might have constituted the foundations of the “language-ready” brain of later Homo species (54). 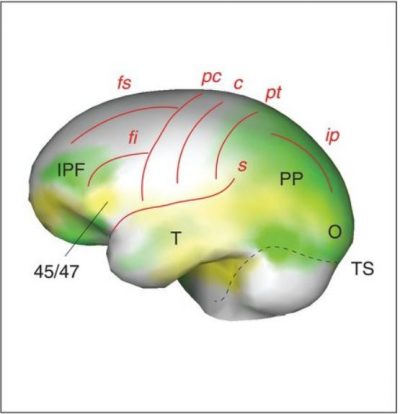