New study in current Science News written up by Virginia Morell documenting a peaceful integration of different pods of dolphins, hitherto strangers. This blog maintains that pre-Homo sapiens hominins were similarly peaceful for which there is ancient DNA evidence here. The reason for all this peacefulness is that both dolphins and our ancestral species have been, and are, naturally selected not by competition among individuals for scarce resources, but by natural selection simply of the most productive relationships at the end of each generation, rendered so by the most efficient co-ordination of behavior, for which dominance competition is a pathology to be immunized against.

IHere is the article: In the summer of 2013, dolphin researcher Nicole Danaher-Garcia spotted something rare and remarkable in the animal world. As she stood on top of the bridge of a sport fishing yacht near Bimini in the Bahamas, she spied 10 adult Atlantic spotted dolphins she had never seen before—speeding into the waters of another group of dolphins.

Most mammals attack intruders, but war wasn’t on the menu that day. Instead, the newcomers—eventually 46 in all—joined up with the resident dolphins, some 120 in number. Today, the two groups of Atlantic spotted dolphins (Stenella frontalis) have partially integrated, diving and swimming together, forming fast friendships, and likely even mating.

It’s a “striking” display of tranquility between animals scientists usually consider rivals, says Richard Wrangham, a primatologist at Harvard University who was not involved with the study. Most mammals fight to protect mates and other resources if they encounter strangers entering their territory, he notes. This research, he says, may ultimately lead to a better understanding of the evolution of peacefulness.

Danaher-Garcia, a behavioral ecologist, and her colleagues at the Dolphin Communication Project observed the two groups of dolphins in Bimini for 5 years, carrying out nearly 300 surveys. At first, the scientists only saw one small group of mixed Bimini and newcomer dolphins. But the next year, the scientists spotted a larger group of males and females of all ages from both communities mixing without “any signs of aggression,” she says. The dolphins continued their friendly behaviors through 2018, leading the team to suspect the two groups were merging. (Because of COVID-19 concerns, the scientists put their studies on hold in 2020.)

The scientists discovered the newcomers had migrated from Little Bahama Bank, an area some 160 kilometers to the north known for its shallow seas, coral reefs, and sand banks. They were part of the White Sand Ridge (WSR) spotted dolphin community that another scientific team has been studying since the mid-1980s.

Whenever a member of the team saw the larger, more heavily spotted WSR dolphins with the Bimini residents, she entered the water to film them. The scientists recorded which dolphins spent the most time together, touching, rubbing against one another (as in the above video), and courting—all signs of burgeoning friendships. In no time at all, WSR males were courting Bimini females, swimming belly-up beneath them in the dolphins’ mating position. The scientists suspect some of these interactions led to actual matings, but they’re waiting for genetic proof. The smaller Bimini males weren’t seen courting WSR females; the scientists don’t know why. 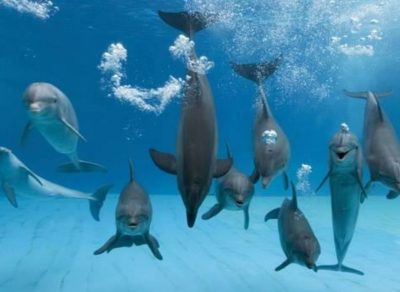