In the June 3rd Issue of Science, a research report appeared on the status of a large collaborative effort to nail down the origin of dogs. The Abstract:

The geographic and temporal origins of dogs remain controversial. We generated genetic sequences from 59 ancient dogs and a complete (28x) genome of a late Neolithic dog (dated to ~4800 calendar years before the present) from Ireland. Our analyses revealed a deep split separating modern East Asian and Western Eurasian dogs. Surprisingly, the date of this divergence (~14,000 to 6400 years ago) occurs commensurate with, or several millennia after, the first appearance of dogs in Europe and East Asia. Additional analyses of ancient and modern mitochondrial DNA revealed a sharp discontinuity in haplotype frequencies in Europe. Combined, these results suggest that dogs may have been domesticated independently in Eastern and Western Eurasia from distinct wolf populations. East Eurasian dogs were then possibly transported to Europe with people, where they partially replaced European Paleolithic dogs.

So the main take-home message is that dogs were probably domesticated twice which means that it was not a fluke (cats and pigs were also domesticated more than once). This is backed up by well-known fifty-year experiment now run by Lyudmila Trut in Russia. They have found that selection for tameness in foxes involves simply selecting those that were neither aggressive nor fearful. Within three generations following this simple selection formula, the foxes born are as domesticated as dogs.

Another view is provided by an ongoing study by Friederike Range and Zsófia Virányi of dogs and wolves raised by humans and then allowed to form respective packs in order to study the differences between wolf-wolf vs. dog-dog behavior raised under similar circumstances. Previously studies focused only on differences between dog and wolf interactions with humans. They demonstrate that, under these conditions, dogs are more hierarchical and less cooperative with each other than the wolves; whereas alpha wolves reluctantly share food with more submissive animals, a submissive dog would not dare approach a more dominant dog that is feeding. These authors suggest that dogs might have been selected to submit to (not cooperate with) humans. This is a conclusion that many dog owners don’t want to hear.

The Blog holds that, driven by deteriorating climates and the threat of extinction six-million years ago, the first humans were “self-domesticated,” thereby shedding the ballast of the sterile hierarchical competition characteristic of apes (and all primates). The dominance-submissive relationship in ape hierarchies “reconfigured” into obedience to the evolved phenomenon of collective authority in hominin groups. “Passively” selected because of immediate increases in birthrates, this collective mental agency of authority evolved to demand submission from dominant individuals. Disruptive dominance behavior became collectively suppressed, but also diminished simply because it was a drag on fertility in these hard times.* Like the dog domestication model proposed above, this was not the current paradigm of selection for cooperation between individuals, but selection for obedience, in the case of hominins, to the authoritative dictates of justice required for monogamous groups to be maximally fertile. The blog demonstrates that all the major facts that we know about our ancestral hominin species can be parsimoniously explained by this initial transformation in the the mind in the realm of emotions and motivations.

* But obviously the drive for dominance did not simply evaporate, because it has come roaring back in our own “fallen” species. 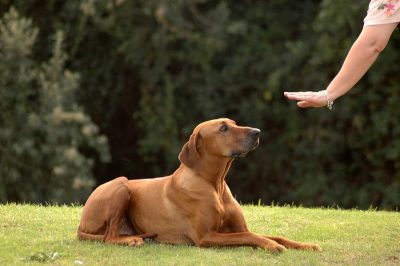