Every once in a while, an article captures my imagination. Such is the case with one written by Axel Timmermann & Tobias Friedrich entitled “Late Pleistocene climate drivers of early human Migration” (Nature, Vol. 538: 6 Oct. 2016). This is big data applied to a most fascinating topic. Here is the abstract:

On the basis of fossil and archaeological data it has been hypothesized that the exodus of Homo sapiens out of Africa and into Eurasia between ~50–120 thousand years ago occurred in several orbitally paced migration episodes. Crossing vegetated pluvial corridors from northeastern Africa into the Arabian Peninsula and the Levant and expanding further into Eurasia, Australia and the Americas, early H. sapiens experienced massive time varying climate and sea level conditions on a variety of timescales. Hitherto it has remained difficult to quantify the effect of glacial and millennial-scale climate variability on early human dispersal and evolution. Here we present results from a numerical human dispersal model, which is forced by spatiotemporal estimates of climate and sea level changes over the past 125 thousand years. The model simulates the overall dispersal of H. sapiens in close agreement with archaeological and fossil data and features prominent glacial migration waves across the Arabian Peninsula and the Levant region around 106–94, 89–73, 59–47 and 45–29 thousand years ago. The findings document that orbital-scale global climate swings played a key role in shaping Late Pleistocene global population distributions. . .

Primer: Predictable “orbital” climate fluctuations arise from the variations from changes in 1) the shape of the ellipse of the earth around the sun, 2 & 3) both the wobble—and the tilt-of-the-wobble—in the earth’s axis. The effects of these three factors over time is termed “precession.”

According to an early exit scenario the first H. sapiens arrived in Europe, India and Southeast Asia and southern China in low densities (<5 individuals per 100 km2) between 100–70 ka, another low-density arrival around 90–80 ka and a subsequent population increase from 60–50 ka. This simulation challenges fossil and archaeological evidence placing the European arrival of H. sapiens around 45 ka. A possible explanation for this large discrepancy between model and observational evidence could be that the small populations of H. sapiens arriving into Europe in the earlier migrations may have been assimilated by the prevalent Neanderthal population and that only the subsequent wave from the Levant led to a gradual transition from a Neanderthal- to a H. sapiens-dominated population regime.

Then in the late exit scenario:

Dispersal from central Africa to northeastern Africa is inhibited due the prevailing drought conditions in north Africa during 116–108.5 ka and 91.5–84.5 ka and a higher human temperature sensitivity is chosen for this scenario. This period is followed by a very rapid dispersal from Africa into Eurasia across the Red Sea and Levant starting in 84 ka.

The authors again invoke the Neandertals as a factor in the discrepancy between migrations to China and Europe:

Our model simulation also shows an almost synchronous early arrival in southern China and in Europe around 90–80 ka. Given this plausible scenario, it is perplexing that the first H. sapiens fossil in southern China pre-dates the oldest discovered fossils of H. sapiens in Europe by about 35–40 thousand years. This discrepancy could be reconciled by assuming that the northern route into Europe was much more influenced by the biological and cultural interaction between H. sapiens and Neanderthals than the southern route into Asia. 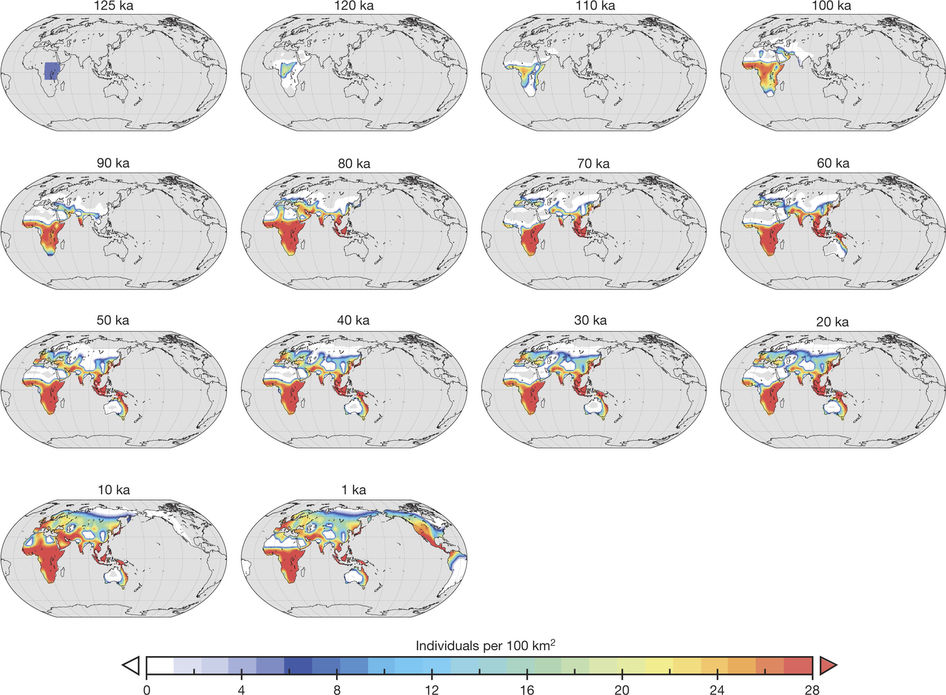 If that isn’t enough for one post, I have to squeeze in another great one on this very topic by Steven Oppenheimer: “Out-of-Africa, the peopling of continents and islands: tracing uniparental gene trees across the map.” Philosophical Transactions of the Royal Society Biological sciences Feb. 2012:

. . . anatomically modern humans left Africa via a single southern exit about 70 000 years ago and rapidly spread around the Indian Ocean towards the Antipodes, long before a small branch left a South Asian colony, earlier on the trail, to populate Europe. . .

The concept that modern human range extension out of Africa proceeded initially along coastlines has depended largely on the rapidity of this movement, as inferred from genetic phylogeography, because only three key founder mtDNA haplotypes (M, N and R) give rise to multiple regionally specific branches en route, in effect, three regional starbursts, found all the way from Arabia to Bali. For this to be possible, these explorers must have been able to exploit coastal marine resources.

Shellfishing, starting from at least 160 000 years ago, was limited to the intertidal zone, and would be over-exploited, necessitating continuous extension along the beach. This beachcombing model provides an immediate and continuous motive for unidirectional, linear migration. Evidence of marine exploitation is found at the very earliest occupation sites in Australia and most significantly at the Australian threshold dating to greater than 42 ka cal. BP in Jerimalai in East Timor. 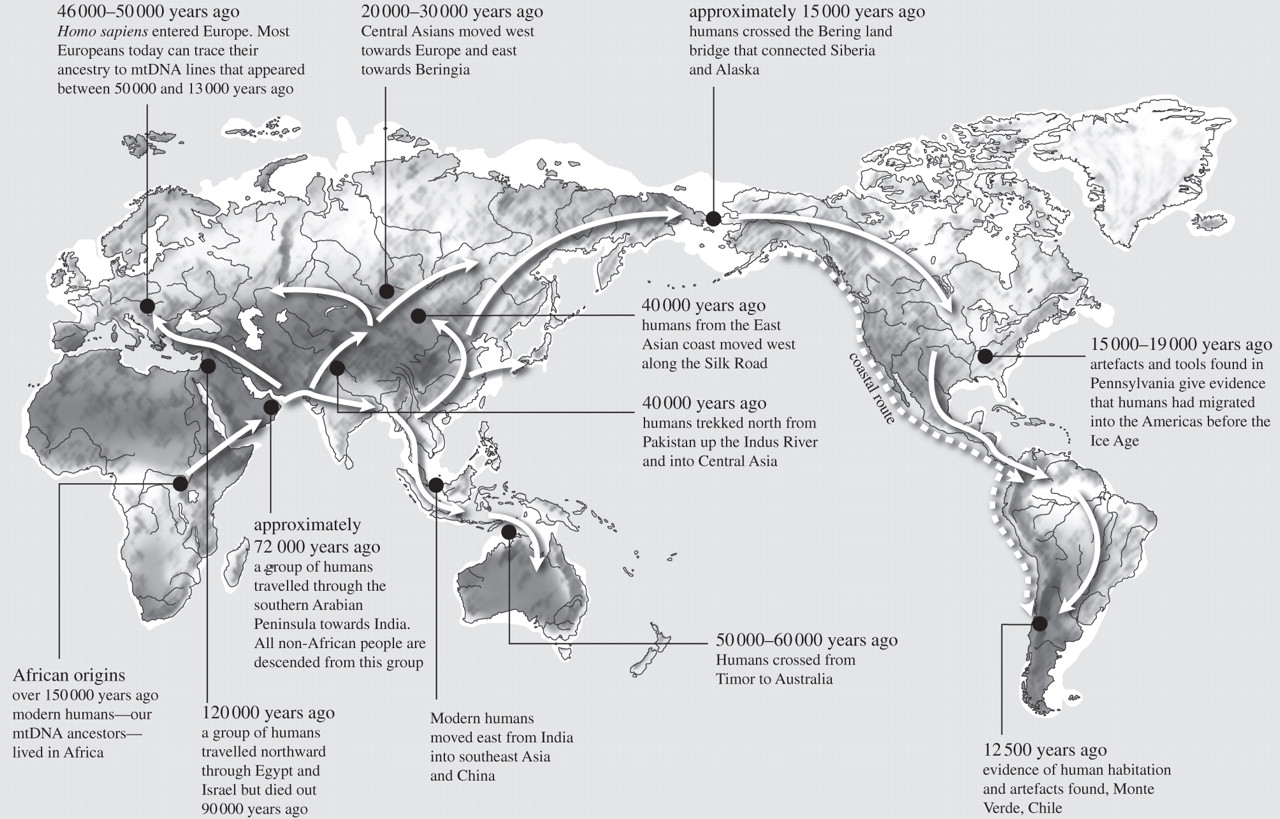 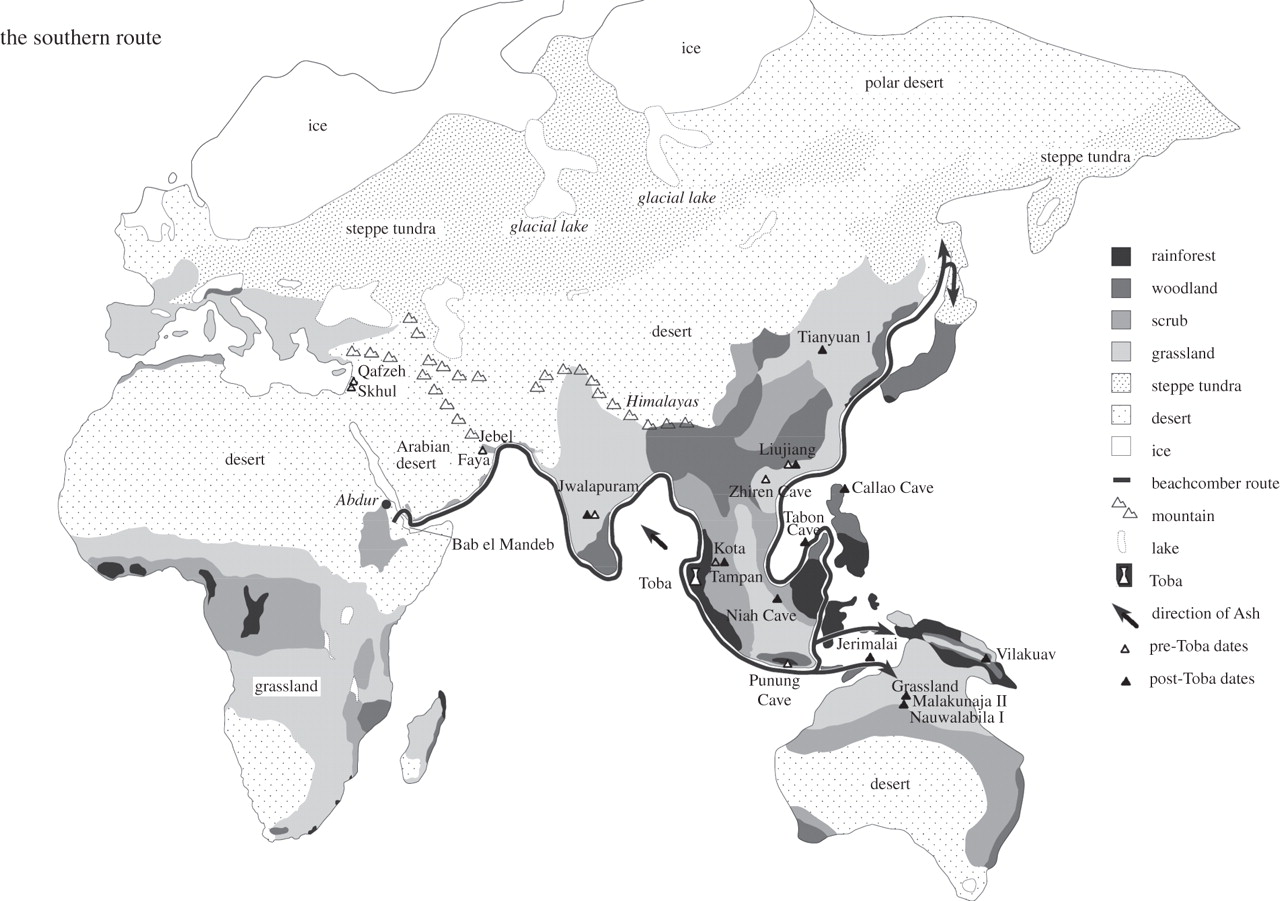 Tags: migration, out of Africa 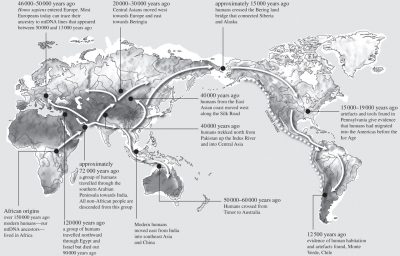