A paper published in Nature in 1997 by Hartmut Thiem reported on wooden spears found at the small town of Schöningen, Germany dated to 300,000 years ago “electrified” the archeological community because the dominant paradigm held that hominins at that time were scavengers, lacking the cognitive abilities to hunt.

This paradigm was (and still is) that hominin evolution took place in the realm of individual cognition, whereas those who have followed this blog are aware that I believe that the majority of the growth of the hominin brain was involved in the group coordination of varieties of collective survival behavior. For instance the step-by-step process of how to construct and deploy these spears was distributed within and amongst groups, and would be communicated amongst them in the carrying out of these activities in real time. Hominins were constantly communicating with one another seeking the tone authority that connoted how things were done correctly from one moment to the next. It was as if groups were organisms and their language was their nervous system coordinating the evolved behavior of groups to survive.

There is a feature article in this week’s Science that updates this discovery with the accompanying images.

Researchers led by archeologist Thomas Terberger found that the growth rings in the spruce shafts are narrow, indicating that the trees grew slowly in cool conditions, leading to a very hard wood. The branches used were at least 50 years old and the hominins chose thin ones—between 2.4 and 4.7 cm in diameter—to make these slender, elegant weapons.

The spears were deposited in the shallow part of a lake that had persisted for 200,000 years through many changing climates.

Also found with the spears were the fossils of over 50 horses which are now thought to have been butchered over the course of many years by small groups of hominins. Because there is no evidence of spruce pollen (the spears are spruce)  anywhere near Schöningen, and the horses’ diet inferred by studying their teeth indicate that they also came from different places, researchers inferred that the lake was probably a crossroad for both the hominins and the horses.

Why they were found in the lake has spawned imaginative speculation, such as the idea that the horses might have been killed in the winter when the lake was frozen.

But, again, the primary hominin adaptive advantage for 6 million years was their ability to coordinate group behavior.  Pre-modern human hominin cognition was a distributed communal cognition 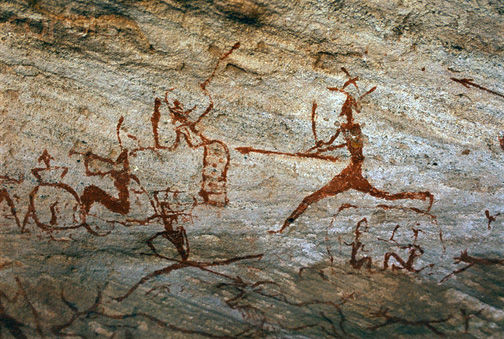 I picture groups of hominins deliberately herding the horses into the water, which limited the horses mobility (surely hominins were excellent swimmers) and then surrounding and killing them by thrusting their spears at close quarters. Small groups of hominins hunted as if they were single organisms coordinated by the authority of functional behavioral algorithms evolved into their language and preserved across generations by their continuous immersion into complex, contingent rules of multiple communal procedures. Their constant communication bore similarities to bands of musicians all intently watching each other, all making small adjustments to stay in sync.

The only other sign of similarly constructed weaponry is a 400,000 year-old fragment found in 1911 at Clacton-on-sea in the U.K. However, it is a fluke that these wooden spears were preserved in the mud of this lake, and I would not be surprised if these kinds of wooden weapons for hunting were constructed much earlier, but that none have survived – at least no more have yet been found.