Ordinarily, the principle of parsimony in evolutionary biology refers to the

assumption that similar traits in closely related living species, in this case, chimpanzees, bonobos, and humans all derive from our common ancestor.  Frans deWaal and Christopher Boehm have argued respectively that empathy and the capacity for conflict resolution are traits shared by all three of us.  The law of parsimony in evolutionary biology seeks to explain novel human capacities to the greatest degree in relation to the traits of our closest relatives with the assumption that nature seeks evolutionary paths that maximally conserve preexisting traits.  The problem is that in the attempt to explain novel human traits as derivative from those of chimpanzees, one runs into much more complexity in the construction of kin selection, game theories and multilevel selection issues.

chimpanzee and bonobo traits in human evolution is influenced by the Darwinian politics over the issue of human exclusivity.  Let’s face it; humans are different, very different, and I am focused on the novelty involved in hominid evolution all the way through from the beginning.  The proposed mechanism of “selection inclusion” very much does obey the evolutionary law of parsimony in that its constituents are the dominance and submissive mentalities that are a central feature of the entire Primate Order.  However, much more important is that the acceptance this single evolutionary innovation creates in a single stroke a simple explanation for all the novel hominid capacities thereafter.   Here I am using the idea of parsimony

in the same way that Alfred Wegner used the idea of 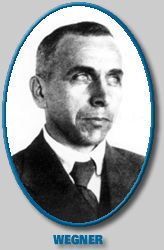 continental drift (plate tectonics) as a parsimonious explanation for a wealth of diverse geological data, and, for that matter, the simplicity of natural selection to explain the complexity and diversity of species.

By means of this mythological transformation, a new kind of group organism emerged comprised of 20-30 individuals in monogamous bands of roughly four to seven families.  The transformation that stood at the very center of the acquisition of the status of organism to describe these early hominid groups was the innovation of a novel method of communication called language (click on it.)