In the first two blog-posts of the “Deep Evolution of Emotion” series, the attractive force of sex arrives on earth to forge the mother-infant bond for the purpose of the protection of the mother’s genetic investment in her offspring.  The genes constructed for this purpose were “turned off” before entering the lonely struggle for adult survival. However, once afield, this genetic structure had the potential of establishing a sanctuary from the harshness of individuals competing tooth and claw. It was thus inevitable that these benefits would be progressively selected in adult relationships and that these newly evolved emotions would provide the raw material for kinship groups, and then wider associations, to gradually draw together under the selective pressure driven by the advantages of mutual protection.

It was but an easy evolutionary trick, used many times in nature, to allow the functioning of these juvenile genes to drift up into adulthood simply by gradually not turning off their “switches”.  Slowly, ever so slowly, the emotions of mother-child attachment began to transfigure the nature of the primordial impulses to fight or flee within a group.  Most centrally, seeping up and into adult associations was the flow of narcissistic sexuality, washing the goodness of these feelings now arising from the mutual contact of the group, drawing it together and relentlessly inveighing against the centrifugal force of the fight & flight responses.

Upon this expansion upwards into adults, the

fight response was transformed to focus on the maintenance of this narcissistic pleasure of contact, and in this process was “stretched out” into a constant state of competitive politics. The aim was now to seize and hold onto the ambient “resources” of narcissistic feeling which newly flowed upwards through the hierarchy of the group.  The fight to death was largely replaced by faint and bluff only occasionally needing to be authenticated by physically aggressive demonstrations.  The stability of the emotional “state” of dominance thus created was maintained by the intense nature of narcissistic rage to hold onto the desired feeling once gaining possession of it.  It is easier to keep a bone from a dog than grab it from its mouth.  The ranking system thus created was maintained by the superfluity of these “public” narcissistic resources; they flowed not only upwards through the ranks, but also reflected back down in response to support, sufficient to emotionally nourish the lower ranking members of the group, and thus to inhibit and stretch out their flight response into the emotional state of submission.

All the while, perhaps the most important emotional ingredient of them all, inching up largely unchanged, encircling these newly bonded creatures like a vine, was the increasing effect of separation anxiety progressively transfusing the space outside the group with dread.  The rise of this emotional “wall” around the group commandeered yet another fear that then decisively contributed to the creative dynamism of the social mix.

The fear of being trapped and cornered is elemental, transforming

panic into intensive rage.  Drawing from this archaic reservoir, the emotional “pull” of the reward of narcissistic feeling was supplemented by the “push” of the feeling of being trapped in the periphery of submissive rank up against the wall of banishment.  The assuagement of these newly altered fears motivated pressure inward and up the social pyramid. This fear of being trapped, transformable into the rage of ambition, would grow with the progressive immersion into social environments to end up, along with heightened separation anxiety, as two of the most central hominid motivations effected by uniquely enhanced aversions to them. 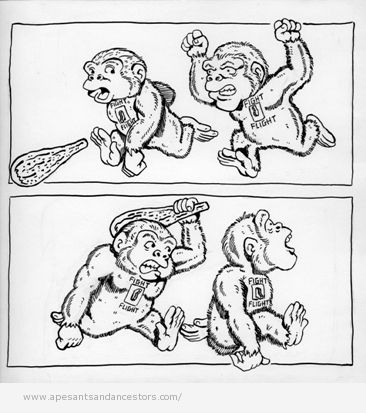