Forty years ago, I moonlighted at DC General Hospital’s Emergency Room while I was in my psychiatric residency. You never knew who was come in the doors down there at the General. The “White House cases,” were a staple, a motley collection of characters pulled off the fence surrounding the presidential residence. One evening in particular is etched in my mind. I received the usual call at about midnight from the nurse, who told me they had a “doozy.” The on-call room was quite a distance from the ER, and when I turned a corner, I could vaguely see a bit of a hubbub at the end of the very long corridor.

The character I am about to describe could be compared to the protagonist of T. S. Eliot’s poem “The Love Song of J. Alfred Prufrock,” which portrays an average man who is anxiously adjusted to a rather narrow modern life. Early that morning, this nondescript gentleman woke up and, I’m here to tell you, he felt G*R*E*A*T! Most of all he felt an enormous amount of energy, which, as William Blake famously said, is “pure delight.” His mind was racing from one thing to the next. His belly was full of laughter and fun. He felt he had a large audience somehow watching him with rapt approval, loving his “performance,” anticipating with collective bated breath what in the world he would do next. He thought to himself, “Wait ’till they see my next move! They’ll be rolling in the aisles! They’ll LOVE it— but first I need some cash.” He hurried to the bank and struck up conversations with several bemused passersby while waiting for the bank to open. “I need a new car and I want to pay cash for it today,” he told the banker, who was captivated by the utter confidence of his ebullient mood. Next, he drew a crowd at the Cadillac showroom as he theatrically insisted that he buy the model off the showroom floor. He was in a big hurry, wanting to get going with whatever wonderful thing that he was going to do next (which constantly shifted with every passing moment). As he got behind the wheel, he suddenly thought, “It’s a beautiful day. A great day to go out to the beach, and who knows what great, fun things might happen?” But then, out of the corner of his eye, he saw a costume shop, and not being able resist the riotous possibilities it might hold for him and his imagined horde of fans, did a U-turn and went in.

When I reached the ER, this fulminantly expository figure was surrounded by three or four of DC’s finest. He had been picked up for “disorderly conduct.” Before me was a fifty-plus-year-old balding man in a rumpled blue Superman uniform with the cape twisted around in the front like a large red bib. The pièce de résistance was that he was wearing a necklace comprised of small plastic breasts!

This person was in the grip of an acute manic episode. 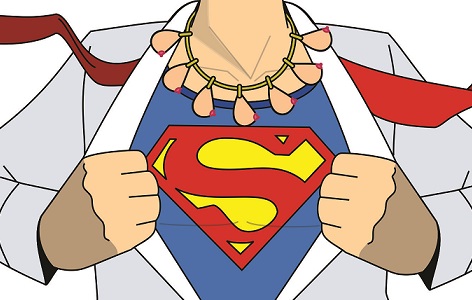